I Spit on Your Grave Movie Information 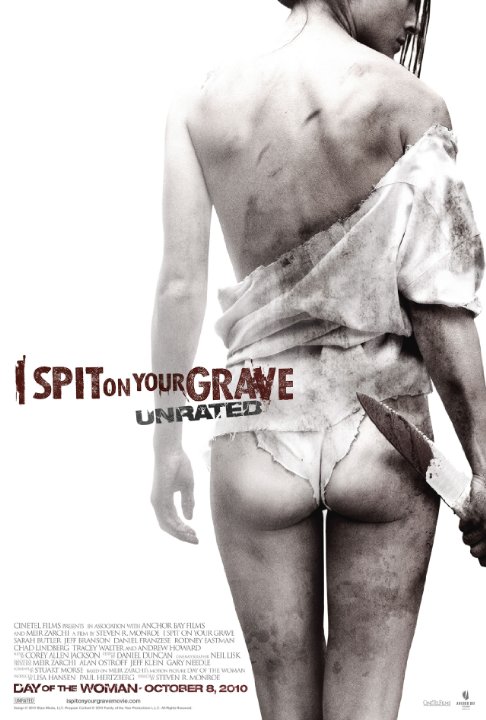 Plot: Remake of the 1978 Day of the Woman: A writer is raped and brutalized at her cabin retreat and left for dead - but she lives and seeks revenge against the men who attacked her. -- Chris Kavan

As stated above this is a remake of the 1978 version of Day of the Woman. I've seen both however I do prefer this one. The horrible abuse of a beautiful woman results in her going after her attackers. Her elaborate ways of revenge was gruesome and wonderful. I truly feel in love with her at the end. A great watch for those who have strong stomachs,,,

Not a movie for every pair of eyes to watch. Not sure why it has garnered all of the bad reviews. The plot is purely revenge torture however the camera really doesn`t show all that is happening. Much is left to the viewers imagination. I found myself cheering for Jennifer as she systematically eliminates her tormentors one by one. I do think the director should have penciled in the month or so that she was forced to hide out and live off of the land before she began her revenge.

Finally! Some gore that's actually impressive. So many movies have not met my standards on gore; in fact, this is about the only one I can think of that really has. I was hoping for more in movies like 127 Hours and Inglourious Basterds, but it was always so much softer than what I was looking for. I couldn't take my eyes away from this one. Her tactics are just beautiful - this is also the only movie I can think of where a sufficient amount of revenge is sought. I found it artistic and astounding. Probably not for the faint of heart. I hope more filmmakers decide not to go so lightly on the blood and guts and start a new era of grindhouse films.

"You know what they do to horses that can't be tamed, Johnny? They geld them."

In the run-up to "I Spit on Your Grave II", I sat myself down and watch this one first. I'm not sure I'm going to watch the second part after this experience. In my opinion it's not really a horror film. It is rather a revenge movie visualized in a very explicit and confrontational manner. This film is a remake of the original film from 1978, which I have never seen and so I can't make a comparison of this remake and conclude if it was a successful remake or not.

The first part of the movie is awful and hard to get through. They could have made the whole rape scene a bit shorter. But it would be a very short movie if they did that because it eventually covers just two facets: the rape and the …

Sometimes my curiosity is my biggest enemy.

Remake of the dreadful 1978 Day of the Woman: A writer is raped and brutalized at her cabin retreat and left for dead - but she lives and seeks revenge against the men who attacked her.

I Spit on Your Grave made me feel dirty inside, like I'm covered in muddy dirt that's everywhere around me.

I Spit on Your Grave review

Jennifer Hills (Sarah Butler) goes to a secluded cabin to write a novel. Three men humiliate her for no reason whatsoever. She escapes and runs into Sheriff Storch (Andrew Howard), who then takes part in the malicious acts. Acting was amateurish, no background development from the antagonists, a Sheriff who includes himself in a crime and the so called victim suddenly had clothes when everything she possessed were burned. Premise was preposterous, even Saw/Evil Dead 2/Death Proof had more taste than this. I Spit on Your Grave shows us that revenge is the best way to resolve things. This reviewer doesn't mind torture or gore, as long as it serves it logically as a film, not for its sake. This is acquired taste though it shows female empowerment.

Worst All Time by Matt

No posts have been made on this movie yet. Be the first to start talking about I Spit on Your Grave!