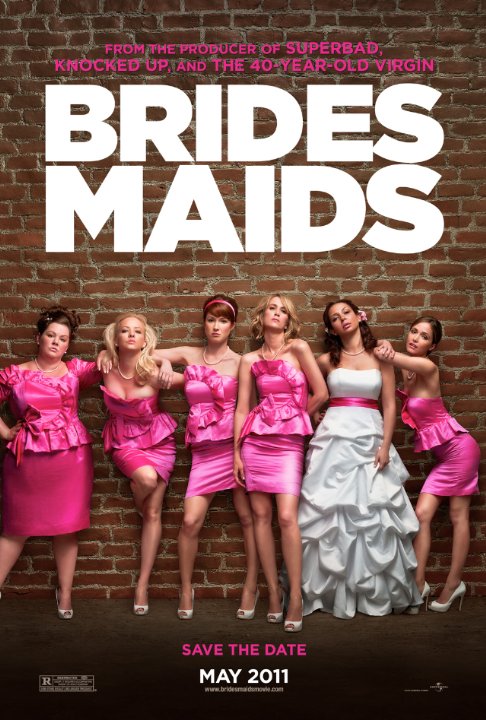 Two women fight for the right to plan their friend's wedding party... sounds like bride wars. This movie has it's funny parts but I don't think it's the best comedy yet.

Kristen Wiig has put herself on the map with this one, along with Melissa McCarthy and Rose Byrne. Braidesmaids is not just a chick-flick. It is a well-written comedy that will go down in history as a memorable film. It's great to see some women get a chance to break out and show what they can do. Hollywood mostly tries to strap female actors down, but the really good ones (like Melissa Tomei and Sandra Bullock) eventually find a way to make their mark. Very enjoyable performances by all the ladies in this one.

Bridesmaids follow Annie Walker (Kristen Wiig), the maid of honor for her best friend Lillian's (Maya Rudolph) wedding. While she is preparing for the big day though, her personal and professional life is already in shambles as Anne loses her job, is treated like dirt by her love interest (Jon Hamm), gets kicked out of her own apartment (by her Australian roommates) and is forced to live with her mother (the late Jill Clayburg).

Her situation is not helped by the presence of Helen (Rose Byrne), who is beautiful, rich, saccharine sweet and a colossal, perfectly pedicured thorn in Annie's side trying to become Lillian's new BFF.
It's refreshing to see female actresses delivering raunchy, funny lines that aren't just about their respective sexual partners. The movie nicely portrays the …

A drama than a comedy

When a bride's best friend meet the other friends, the party won't stop, and so the competition. Annie (Kristen Wiig) is a maid of honor of her best friend Lillian (Maya Rudolph). She has this immediate conflict with the bride's other friend Helen (Rose Byrne) as she tried to be in charge of Lillian's wedding. With the kind of life she has, alongside with this encounter on her best friend's wedding, Annie will show how far someone should go for her loved ones.

***
"Bridesmaids" isn't a comedy that will make you laugh out loud, it is also a bit boring actually. But, I think it is safe to say that, THOUGH IT IS PLAIN AND FLAT, THERE IS SOMETHING BIG IN IT. The story is good. I like hearing the lines. The actresses did well, ALL OF THEM. This film will surely touch your heart while you …

I'm surprised that I'm one of only two people that have reviewed this movie. &amp;nbsp;I highly recommend it to everyone. &amp;nbsp;Best new movie I've seen so far this year!

The fact this is now Judd Apatow's largest-grossing movie bodes well. I think I'll enjoy it.

I'd say that Bridesmaids' intended audience was pretty much the same audience as the Hangover movies plus&amp;nbsp;more -- including women in the fun and games that has long been mostly associated with men.And maybe&amp;nbsp;people -- especially&amp;nbsp;men --&amp;nbsp;are just learning that the idea that &quot;girls just want to have fun,&quot; (sometimes)&amp;nbsp;isn't just the theme of a Cyndi Lauper song.People -- men &amp;amp; women --&amp;nbsp;can be&amp;nbsp;pretty similar to each other in a number of ways with just enough &hellip;

After doing the weekend box office reports it's amazing how well this film is holding up - most films drop 40% - 50% after their opening, but Bridesmaids has consistently held on to its audience each week.I have to admit, I'm impressed and will make time to watch this when it becomes available, even if I don't think I'm the target audience.

I have 4 daughters, one of whom got married in a big fat Scottish wedding May a year ago, so the bridesmaids theme really resonated with me. So we eagerly went to see Bridesmaids and loved it, of course!It was funny as all get out much of the time with some sweet, sad, serious and touching moments scattered here and there. A wonderful fun movie. !:]]