I Am Number Four Movie Information 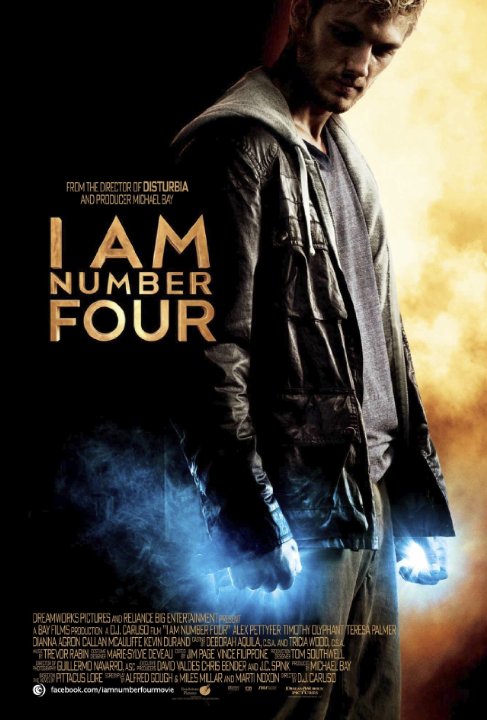 Plot: Nine Lorien aliens flee to Earth after their home planet was destroyed by another alien species, the Mogadorians. On Earth, the Loriens have superhuman powers as they become adults. The Mogadorians have followed the Loriens to Earth in order to kill them in succession. The first three have been killed, but Number Four is not willing to give up so easily.

This movie has a 33% on rotten tomatoes and on IMDB it's got a 6.1/ 10. and am not saying it is a good movie but I didn't think the movie was that bad as people and critcs say but the movie has alot of things wrong with it but to me I enjoyed it. the movie has alright visual effect's and the story is kind of a cliche, but the movie itself viewing it as a action movie it does give the action and fight sense.

Eh - it's a lot like Twilight but with aliens instead of vampires. The story isn't incredibly interesting - the characters are on about the same level (except Timothy Olyphant - the man rocks) but if you're looking for a little bit of fluff, I guess you could do worse.

I thought this movie was awesome. It has a great story line and the special effects were amazing. And the two characters we have met have awesome abilities. And I loved the way they were different. Just because they came from the same planet didn't mean that they had to be the same in their personalities and their abilities. Can't wait for the next one.

I started watching this without any prior knowledge. Ultimately, it is not that special, but also not that terribly bad. It's obvious the makers played it safe. It's ultimately a mix of a high-school teen movie and a soft-core SF. The high school section contains all the cliche ingredients: the jock (quarterback, of course), a cheerleader, a nerd who's constantly harassed by the hunks of the school, the newcomer John who's not bad looking but is seen as if he's an alien (what a coincidence). Off course John will defend the nerd and is immediately attracted to the cheerleader at first glance (melt, sigh, swoon ...). How obvious. You can feel a romantic love relationship coming up. So the main and largest target group, the giggling teenage girls, is satisfied now.

And now we have to add …

I Am Number Four is a Sci-Fi, Action film which centers around one boy from a far off planet called Lorien. Long ago, the bad guys of this film known as Mogadorians invaded the planet. Nine children with special powers managed to escape with their protectors to Earth. Now the Mogadorians are hunting down and killing these grown-up children in order.

The film opens, and we see Number Three being killed by the Mogadorians. Alex Pettyfer plays Number Four, who is living a sun kissed life in the Florida Keys until an underwater vision of a Mogadorian sends him fleeing in search of a new home with his guardian Henri (Timothy Olyphant).
They move to Paradise, Ohio, the irony being that this town is nothing like paradise. Number 4 changes his earth name to John Smith, dyes his hair blond …

THIS is how you make a teen movie

To all those making movies in the "teen" genre.. THIS is how you do it.
The story is awesome. The actors can actually ACT. There is tons of action. While there is an underlying love story element, it doesn't overpower the movie, isn't the core of the story, and viewers aren't assaulted with gag-inducing lovey dovey lines.
This is a movie that guys and girls can both enjoy. The actors aren't devoid of emotion (sorry, Twilight saga, I love you, but for some reason, the directors are telling your cast they're limited to two facial expressions, max) and are actually quite good and were well cast.
It does deviate from the book a bit and there are parts that were left out or changed which disappointed me a little, but overall it was pretty faithful. Number Six steals the show.
It's too …

No posts have been made on this movie yet. Be the first to start talking about I Am Number Four!