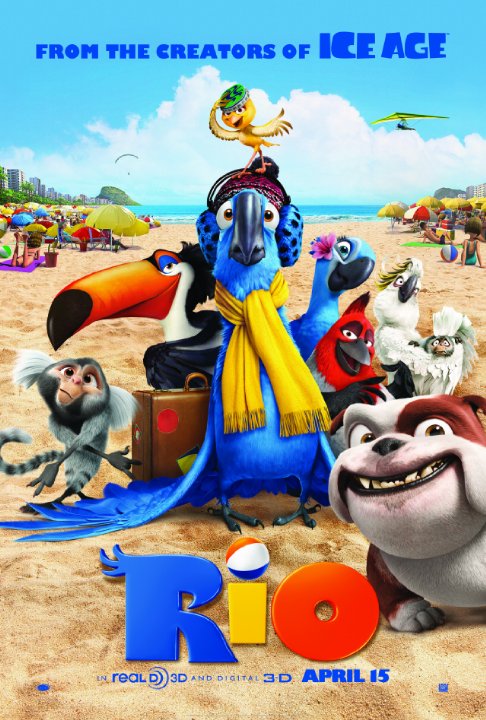 Plot: A macaw from Minnesota, pampered and nerdy, finds himself learning to become a true bird of paradise when he finds himself in Rio de Janeiro. -- Chris Kavan

The story is about a macaw from Minnesota, pampered and nerdy, finds himself learning to become a true bird of paradise when he finds himself in Rio de Janeiro. This movie has beautiful animation and enjoyable songs.

Starts right off with a beautiful song, bam! I never felt so worried with a character so quickly, not joking, took only two minutes. I wonder how the made birds become the most adorable and lovable creatures in the world. So, the movie is all colorful and bright, we all know what Pixar does, but they exceeded my expectations this time. The characters and plot have a certain complexity for a family movie, that's a great thing. Even though n this kind of movie we all know what course it will take, they made it very good. Perfect timming on character presentation/development, beautiful enviroment, a fun and delightful movie. When it ended I just felt really happy.

Rio sounds like a typical animated flick with that one word catchy tune with an almost predictable story. Yet coming in i certainly knew what to expect and what would the outcome be but then it completely blew me away with a whole new different perspective of it. It somewhat feels like everything is ordinary, even the trailer almost gives everything away but after all was said and done i was pleasantly surprise with the outcome. I almost felt like i was watching a disney flick with a modern exotic flavor since it set on Brazil. At the first few minutes i thought it would be a disaster since the main character literally sounded like a facebook nerd bird with not so funny lines to deliver but then when the sights change i was mesmerize by what brazil has to offer. Not the just the scenery …

No posts have been made on this movie yet. Be the first to start talking about Rio!