The Chronicles of Riddick Movie Information 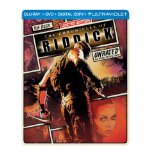 Plot: Riddick, hiding on a far away planet gets mixed up in feud between humans and those that want to convert humans into something else. As he jumps from Planet to Planet, he is still a wanted man and tries to do everything to escape the battle only to become the focal point of war.

Intriguing plot, outstanding effects and editing, haunting soundtrack, and best of all -- Vin Diesel in all his warrior glory. I watch this film whenever it airs (dozens of times), and I discover new details each time. It's in my TOP TEN best sci-fi movies of all time!

As Riddick jumps from Planet to Planet, he is still a wanted man and tries to do everything to escape the battle only to become the focal point of war. I really liked the first movie because I thought it was cool and original, But this movie sucks. The movie bored me and the rest of the film was forgettable.

There are some decent sci-fi twists and effects, but this sequel is missing the grittiness and terror that enveloped the first film. I have to think that a lot of that has to do with it being cut for a PG-13 rating.

The Chronicles of Riddick review

A Necromonger high priest coerces people to convert. Riddick avenges the death of Imam and is captured by Lord Marshal. Kyra (who used to be Jack) was rescued by Riddick. More action paced than Pitch Black and supporting characers were interesting to follow. Screenplay was clever with lines: "We are a world of different people and religions. We cannot be converted." "No one really knows the future." "Then you do it for the faith." Pace was definitely better than the first instllment and special effects just stunning. Diesel gives a convincing performance. One of the underrated sc-fi films in the 20th century. Nothing groundbreaking, The Chronicles of Riddicks does relate certain thematics of faith, change, fate and heroics despite ones reputation.

"The Chronicles Of Riddick" by Yojimbo

Riddick returns to discover that he is a warrior prophesied to end the brutal reign of a race of religious zealots conducting a crusade against the rest of the universe. I was a fan of David Twohy's previous work, particularly the original to this somewhat bloated sequel Pitch Black which was a visually stylish sci-fi horror that inventively transcended it's meagre budget. In this however he has the keys to the toyshop and wantonly plunders from Macbeth, Krull and everything in between. He is clearly trying to do Star Wars in the style of Dune, but falls a little short of the epic scale he was aiming for because the mythology he has created is slightly unconvincing and the somewhat episodic plotting. The story is little more than a series of excuses for spectacular set pieces and some of …

The Chronicles of Riddick.

The Chronicles of Riddick.
A sequel to film Pitch Black, in which a ship transporting a dangerous criminal crash lands on a planet of monstrous flying creatures, Chronicles of Riddick is a film I find to be one of the most entertaining I have ever seen.
Richard B. Riddick, or just Riddick, was introduced to us in Pitch Black as a cold and calculating criminal with a dark sense of humour not often shown. Played by Vin Diesel (who, you may not know, plays Dungeons & Dragons!), whose awesome voice gives the character a real sense of being a criminal and dangerous. Riddick, who can see in the dark thanks to an implant he recived while in Butcher Bay Prison (this is recived in the videogame The Chronicles of Riddick: Assault on Dark Athena). Now hiding away on a frozen planet, he is …

No posts have been made on this movie yet. Be the first to start talking about The Chronicles of Riddick!