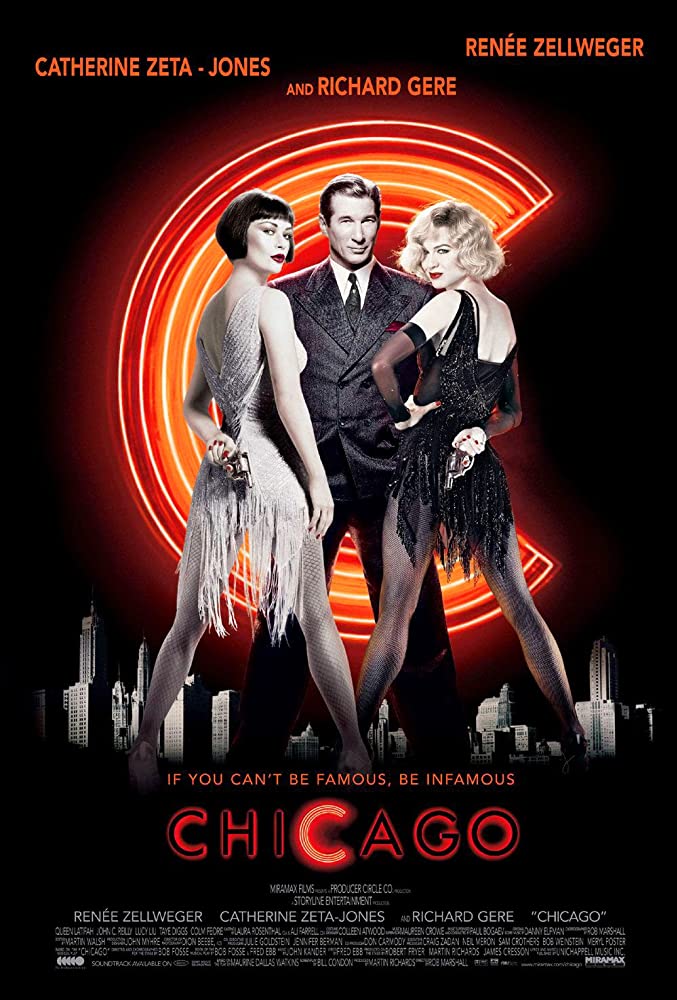 Plot: A pair of killing women try to weasel (and sing) their way out of Death Row in 1920's Chicago.

A complete and utter abomination in every sense of the word. I absolutely despise this movie. The "highlight" is watching Richard Gere try to sing, when he can't at all. The lowlight is everything else in this man hating vomit inducing piece of overrated garbage.

A really good film. Still the best musical I've seen from recent years; films just aren't made like this anymore. Fantastic musical numbers and choreography. Catherine Zeta-Jones gives a phenomenal performance; she completely deserved her Oscar! Great film, but it did not deserve Best Picture!

Among the Best Musicals Ever Made

One of the best musicals ever made. Bob Fosse choreography, the amazing Catherine Zeta Jones in the role formerly played by Chita Rivera, and Rene Zelweger, along with Richard Gere and John C. Reilly. Every movement, every step, every note is a gem done with perfection. The cinematography and costuming are the best. Richard Gere talk-sings his songs, like many stars have done in musicals, including Richard Harris in Camelot. Gere does the tap dancing himself and does a great job. Notice the quiet number by John C Reilly called Cellophane Man, along with the glitzy Razzle Dazzle 'em number (which mirrors real life). A wonderful vacation to the Roaring 20s, complete with flappers, bad girls, bad guys, murder, and outstanding music writing and performing. A musical lover's delight. Among …

As someone who finds most musicals to be nauseating and annoying, I wasn't expecting much from this movie, despite the fact that it won the Best Picture Oscar. However, I thoroughly enjoyed it and found the songs to be very catchy and clever. Certainly one of the better musicals I have ever seen.

The level of talent needed to make a film such as this one is very high. The cast does not disappoint, with some great performances from Catherine Zeta-Jones and Renee Zellweger. I must admit to not being a very big fan of Zeta-Jones, but she is simply incredible in this film, which showcases her immense talent in singing, dancing, and acting. She certainly deserved her Best Supporting Actress Oscar for this performance.

This reviewer is not really into musicals, this one impressed me nonetheless. Maybe because it was directed in a really good manner and well casted. Kelly (Catherine Zeta-Jones) performs All That Jazz while Roxie Hart (RenÃ©e Zellweger) is in the audience imagining her performing. Fred lies to Roxie and pays the price for it. Matron "Mama" Morton (Queen Latifah) recommends Lawyer Billy Flynn (Richard Gere) to Roxie. The editing, production and choreography was well planned. Catherine Zeta-Jones was energetic and electric while RenÃ©e Zellweger authentic. Screenplay was surprisingly good with a few wonderful quotes: Fred â âThatâs life sweetheart.â Mama Morton - âItâs a crazy world.â Roxie â âOpportunities pass you by.â âYou can like the life you're living, …

No posts have been made on this movie yet. Be the first to start talking about Chicago!