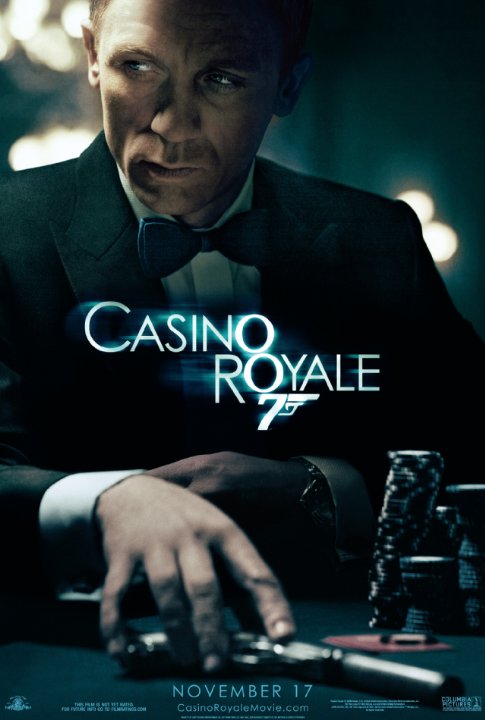 Plot: In James Bond's first mission, he must stop a banker from winning a casino tournament and using the money to fund terrorist activities.

"Casino Royale" fits the 007 franchise into a less wacky, more realistic mold than previous installments, but one thing it keeps the same is its suave, cool-as-ice lead character. Daniel Craig is the best James Bond since Connery.

"The names Craig, Daniel Craig". The movie has good directing and a great cast.

A total surprise. Not only is this a great Bond movie, it may very well be the best Bond movie. Great film.

I have to start by saying I thought the previous film was awful. It was like a cheeseball pastiche of all the worst elements of the worst Bond films; overly formulaic with ludicrous gadgetry, lame innuendo and cliched, two dimensional characters. Casino Royale is similar in that it also takes a lot of cues from the previous films (especially from Russia with Love and On Her Majesty's Secret Service), except it takes all of the BEST elements of the BEST Bonds and distills them into almost the perfect 007 outing. The new Bond begins a new era and resets the character back to the beginning with an opening that dispenses with the ridiculously overblown comic strip action of recent 007 outings and replaces it with gritty cold war thriller style sequence in which Bond busts his double O cherry …

The films consists of Daniel Craig (an egoistic but humane James Bond), Eva Green (Vesper Lynd, the witty and attractive agent from Treasury), Mads Mikkelsen (A poker aficionado banker who funds terrorists, Le Chiffre) and the legendary Judi Dench (the passionate Head of MI6, M). Like other Bond films, James is given missions to accomplish. Unfortunately we donât see the suave manner of completing a task assigned to him. He even breaks in the house of his boss without any permission or notice whatsoever. This Bond is egoistic, straight faced and gritty. The charm with the ladies is still there, heck, even the female characters doubt his character at first. His first mission is in Madagascar to capture a bomb maker. A wild goose chase between the bomb maker, henchman and an …

I outright disagree that Sean Connery is, and always will be, the best James Bond. We have a new 21st century James Bond nowâDaniel Craigâand I happen to believe he is the best James Bondâ¦ at least, so far. What I love about this film is that it resets the franchise story-wise but manages to keep all the components from the past Bond films that made it into a phenomenon. Craigâs icy-cold blue gaze mixed with genuine humanity and heart creates a character who is both lethal but someone that the audiences can root for. This is highlighted during the scenes where thereâs no dialogue; we are left to stare into Craigâs eyes and observe his body language to provide us what his character is thinking and feeling. There are other outstanding performances. Judi Dench as M is complete …

No posts have been made on this movie yet. Be the first to start talking about Casino Royale!