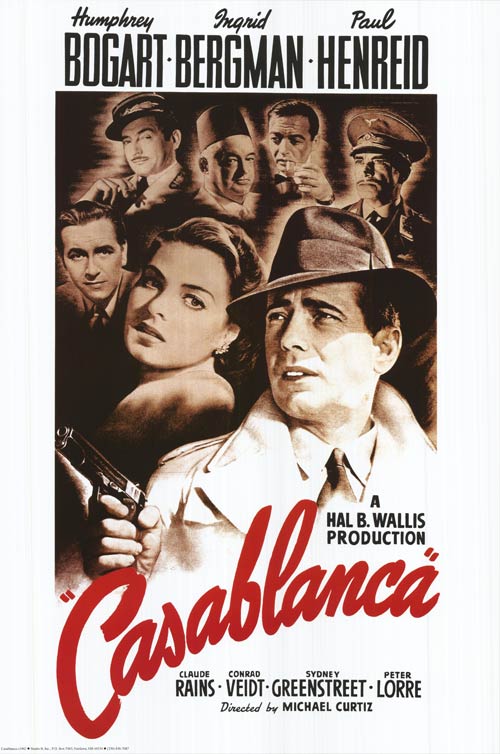 Plot: Set in Africa during the 1940s, Humphrey Bogart stars as a man with a past trying to hide the past. He meets his former lover at his own bar as things begin to complicate.

The poster child of classic movies, "Casablanca" is one of the greatest and most iconic films of all time. With its unforgettable romance, humor, drama, and suspense, it's an undeniable cinema great.

Casablanca is one of classic Hollywood's immortal love tales during wartime. Curtiz was in top shape, and a duo of the size of Bogart and Bergman together was just impossible to miss. To say it is the best love story ever told would be a mistake; however, this has stood the test of time and has effectively marked an eternal stamp on the hearts of generations around the world. In my book, that needs a prolonged applause. 98/100

Casablanca is truly one of the all-time greats. From the smart and revealing dialogue to the noirish setting, the film is spectacular in the way it crafts a unique world of espionage and spoiled romance. All of the principal leads are equally memorable, though Humphrey Bogart gets the lion's share of the script's iconic lines.

Yes. It is that good people.

I know it's a cliche to write/say this nowadays but it's true for once! Casablanca is one of the best movies ever! For this movie to have its plot driven almost entirely by memorable dialogue and iconic characters but remain so popular well over 70 years after its release says something about the state of Hollywood with its reliance on mostly half-baked comedies, derivative horror shlock, and CGI drenched crowd-pleasers. I doubt mind the 3rd one of course but seriously, it's not that heard. Casablanca finds originality and heart in something that had the strong likelihood of becoming just another ensemble piece being churned out regularly during WW2.
Oh look at that, I got carried away again. Needless to say, I loved this movie because of its atmosphere, its exceptionally strong cast, …

Wartime cafe owner Humphrey Bogart's life is turned upside down when the woman who broke his heart walks into his bar with her husband, a fugitive from the Nazis, looking for an escape to America. This is one of those films the phrase "they don't make 'em like that anymore" was invented for. At its core it is a propaganda film made to encourage the American public to join the fight against the Nazis, but it is far from the usual heavy handed flag waver. It skillfully interweaves the patriotic message with political intrigue, wartime heroics and romance with a script full of wit and sophistication. The cast are all pretty much faultless, but it is the uneasy friendship between Bogart and the brilliant Claude Rains which makes the film, and their cynical interplay and banter is a joy to …

Rick Blaine (Humphrey Bogart) owns Rick's CafÃ© AmÃ©ricain in Casablanca. He bumps into an old flame Norwegian Ilsa Lund (Ingrid Bergman) with her husband Victor Laszlo (Paul Henreid) who is a fugitive Czech Resistance leader that escaped from a Nazi camp. Captain Louis Renault (Claude Rains) is a friend of Rickâs and a corrupt official. Political tensions arise in the CafÃ© and Major Heinrich Strasser ensures that Laszlo doesnât conduct any revolt against the Germanâs. The priceless "letters of transit" have been used to flee Ilsa and Victor. Some of the many memorable quotes that I enjoyed: Rick â"Maybe not today, maybe not tomorrow, but soon and for the rest of your life." Louis, I think this is the beginning of a beautiful friendship." Victor â âApparently you think …

Top Films of 1942 by Neobowler

No posts have been made on this movie yet. Be the first to start talking about Casablanca!