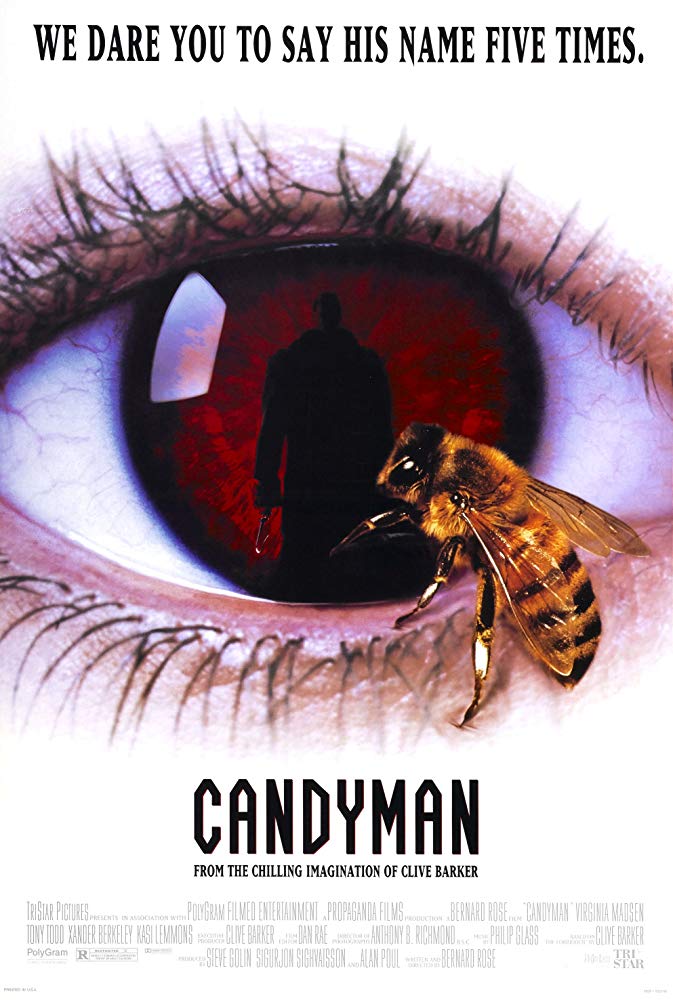 Plot: Helen Lyle, a Chicago student, is writing her thesis on local myths and legends when she hears about Candyman - the son of a slave and an artist who was brutally tortured and murdered for loving the wrong woman. Today, it is said if you say his name 5 times in mirror, he will appear. With unexplained murders all over, the locals blame Candyman, but Helen does not believe, until she calls Candyman and finds that some legends come true. -- Chris Kavan

I remember this movie scaring me quite a bit when I was younger. Let me put it this way: There is no way I would stand in front of a mirror and say "Candyman" three or five times or at all.

"Halloween review": Candyman. this movie is chilling and really shocking at times. but the title of the movie really makes it sound silly and not scary, but when you watch the movie it is "REALLY SCARY". and this movie will get a 3 and a half out of /4 star's "chilling movie".

Candyman is a creepy little urban horror film that uses the idea of rumour and superstition to create the concept of a phantom killer who appears behind you if you say his name in front of a mirror 5 times. And kills you.
While not the most famous movie killer, he's certainly the best thought-out. In his own words 'To be...and yet not have to live' surmises the rather amazing little idea of the film in one line. It's almost like taking a step beyond the dream killer, Freddy Krueger, which is admittedly a good idea. To be so feared, so demonized and reviled that an actual corporeal body is formed is a great idea. This is a thouroughly well directed, edited and shot film, using Philip Glass' creepy title as an overture of terror, and Tony Todd makes the character his own as a supremely …

Okay, I'm sorry, but this is one of the lamest horror movies ever. It is about a guy who lived in a small country town, and was tortured and killed for loving the wrong movie. After he died, apparently, if you said his name, 'Candyman', five times, in the mirror, he will appear. So, in the town of which his apartment was in, unexplained deaths were blamed on the Candyman. So a uni student called Helen, went in search of the facts about the story, for research, even though she didn't believe in the Candyman.

I thought that this movie had a pretty good plot, but the actual movie wasn't any good at all. The blood was oh-so-obviously-fake, and it didn't really catch the attention of the viewer very well, I thought. There was one good thing about the movie, though. There was a good use of …

No posts have been made on this movie yet. Be the first to start talking about Candyman!