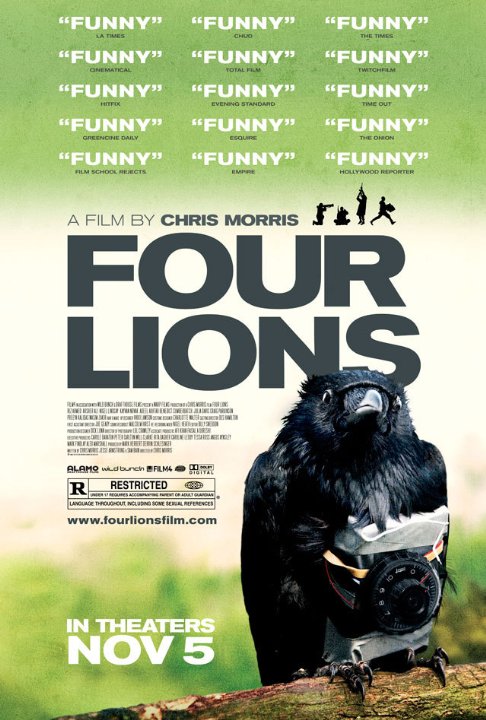 Plot: A group of British Muslim extremists plan the perfect terrorist attack... but may not be able to survive their own bumbling ways and conflicting personalities. -- Chris Kavan

The story is about a group of British Muslim extremists plan the perfect terrorist attack... but may not be able to survive their own bumbling ways and conflicting personalities. This movie is not dumb or silly it is smart and Sharpe.

This movie was great. Very funny and creative. Its different to watch a comedy about terrorists. It really had me into it, because it truly is sick to have the main character be extremists.

A bald guy punches himself, a pair of guys dancing and acting out violence, Alice the girl talks like sheâs high, water gun fight, instructing a bird and many more sequences that were not even remotely close to being funny. The beginning of the film never catches your attention and the premise of bombing a mosque and editing a video threat was plain idiotic. Pacing of the film was sluggish and soundtrack uninteresting. It had certain realism when it comes to its purpose except for the preposterous screenplay and dumb dialogue. Not everything is bad since it had a few logical moments relating to violence, friendship, and family if one listens intently. Four Lions is not for everybody, including this critic.

A group of dim-witted working class British Muslims declare a jihad on the establishment. Chris Morris once again prods at the boundaries of good taste with this scatter shot spoof of Islamic extremism and the government's response to terrorism. I must admit that Four Lions was not quite what I was expecting; I was hoping for a witty satire in the same vein as In The Loop but instead Four Lions relies more on farce and belly laughs (although Omar's hilarious tirades in Urdu did have more than a little of a Malcolm Tucker feel about them!) Because of this I found Four Lions a little disappointing, although it obviously contained the inevitable sly digs at religious dogma, the extremist's manipulations of the weak willed and direction less and the state's shoot first and ask questions …

An Irreverent, But Important Film

To appreciate this film, I think you have to a.) be able to get beyond the fact that the whole film is about the controversial subject of terrorism and b.) have a rudimentary understanding of Muslim ideology and American politics. The film brilliantly serves as a farce on how Americans view Muslims, how Muslims view Muslims, and how the American government views Muslims. It is out of these conflicting ideologies that the film pulls some strong absurdist and dark comedy, but also some poignant themes. Laughter is sometimes the best medicine for understanding painful subjects at it is from the dark side of terrorism, that Four Lions picks apart its subjects in ways that are both funny and thought-provoking. The underlying theme of Four Lions is the brainwashing methods of jihadist …

No posts have been made on this movie yet. Be the first to start talking about Four Lions!