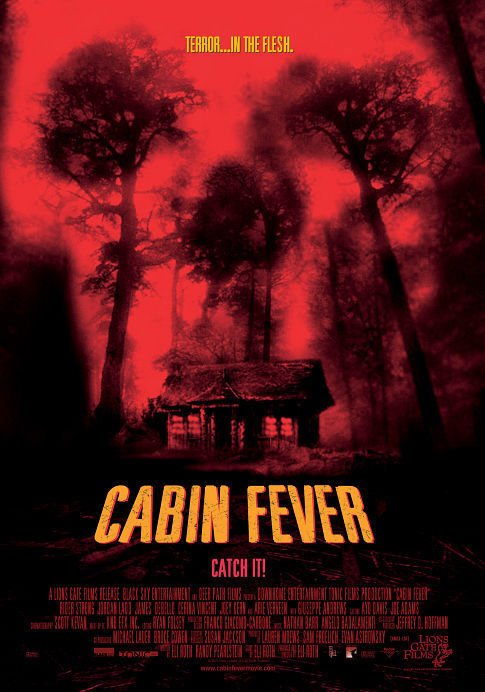 Plot: Five college students go away on a vacation to this secluded cabin for a study break. Things start to fall apart when one of their friends get terribly sick and the locals are no help.

A revolting and clichÃ©d low-budget gore film. Maybe if "Cabin Fever" was more of a satire of its genre, then I could've enjoyed it.

Five college students go away on a vacation to this secluded cabin for a study break. Things start to fall apart when one of their friends get terribly sick and the locals are no help. Eli Roth is sick man I mean his movie are mindless gory or just playing stupid. this movie has once again gross sense and the acting is okay in this film.

I am not a very huge fan of Eli Roth. I have watched a few of his movies. He is a okayish sort of director. The basic premise is that it is about a group of college graduates who rent a cabin in the woods and begin to fall victim to a flesh-eating virus. Overall an ok sort of horror movie with a very bad ending. This movie was the directing debut for Eli Roth. Trivia says that the inspiration for the film's story came from a real life experience during a trip to Iceland when Roth developed a skin infection. Considering the fact that Eli Roth is a member of a group of filmmakers dubbed the Splat Pack because of their explicitly violent and bloody horror films, this film ha no such gore or blood. Only watch if you have nothing else to do.

It's sad that I refer to this as 'early' Eli Roth; since he's fairly young and not really known as a good director, but more so as a gory visionary (if that's the proper word).

One reason why I like this movie is because it is campy and was intended to be campy. Fun story, fun drama between the characters and and overabundance of gore. Usually, I'm not a big gore fan; I figure..what's the point? If I want gore I'll put a whole bunch of beef in a blender and watch that spin around for a bit.

I agree with both reviews...take caution before watching and just plan to be enjoyable entertained. I imagine this movie as a fun flick to watch with an open-minded group of friends when you're all just relaxing with some drinks and want to laugh and go "ewww".

Best part in the whole …

No posts have been made on this movie yet. Be the first to start talking about Cabin Fever!