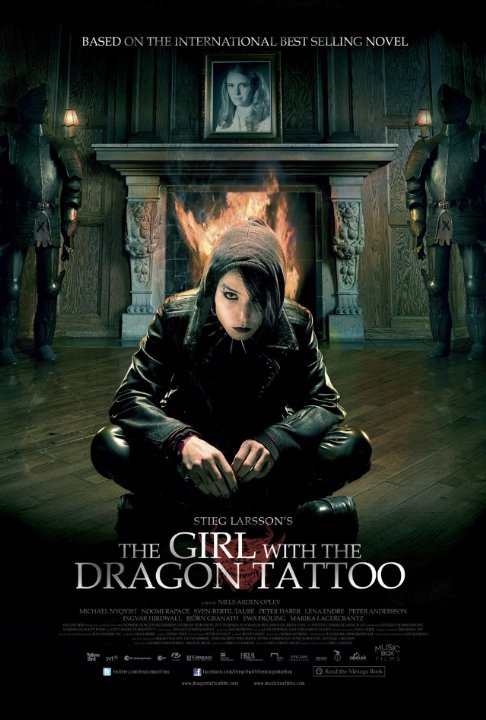 Plot: Based on first book of best-selling trilogy by Stieg Larsson - Mikael Blomkvist, a disgraced financial journalist is hired by an aging head of a once-powerful Swedish industrial firm to solve the 40-year-old mystery of his missing niece. Meanwhile, anti-social hacker Lisbeth Salander finds herself having to deal with a new caretaker while secretly aiding Blomkvist, until their paths finally cross. -- Chris Kavan

A near flawless mystery thriller that holds your attention the whole way through, and only succumbs to one or two genre clichÃ©s.

Mikael Blomkvist, a disgraced financial journalist is hired by an aging head of a once-powerful Swedish industrial firm to solve the 40-year-old mystery of his missing niece. Meanwhile, anti-social hacker Lisbeth Salander finds herself having to deal with a new caretaker while secretly aiding Blomkvist, until their paths finally cross. This movie is dark and dirty inside but it works for the drama in the movie.

I have not read the book, and had no intention of checking this movie out in the first place. My wife had other plans. So I sat on my couch awaiting what I thought was going to be a shallow and far-reaching movie. This is actually a great crime/detective thriller with great characters and great acting. The rape scene was far too brutal for me. I guess some people might think that adds to some kind of anger to keep the movie going, but I thought it was unnecessary and disturbing. Other than that, this was a fantastic movie and is definitely worth the rental.

"The Girl With The Dragon Tattoo" by Yojimbo

An emotionally damaged young researcher helps a disgraced investigative journalist reopen the case of a series of murders that occurred 40 years ago. Having heard so much about this "international best seller" and the fact that David Fincher deemed it worthy of a remake meant that the idea of this film intrigued me, but despite its weighty reputation I felt seriously let down. Technically, TGWTDT is absolutely fine. The performances all solid, the pacing and direction well executed and the photography is attractive and stylish. Unfortunately all these good qualities are built on quicksand because the plot is, in a word, bollocks. It's exactly like one of those 90s detective TV shows (Inspector Morse sprang to mind). But worse. It involves a girl who is emotionally traumatised (you can …

Sometimes mistakes are a good thing - I got tripped up by a little misunderstanding and ended up catching this great DVD as a result. I had seen a blurb about casting for a film named âThe Girl With The Dragon Tattooâ and was just intrigued by the title. In researching it further, it looked like it had already been released and was now available on DVD. Now I was really confused, but ordered it anyway. Come to find out, the current release is a Swedish export (with subtitles, so please note). The casting news I saw is for a US-based remake of the same film due out in 2011. Nonetheless, after watching this, I was thankful for the mix-up.

Swedish author and Expo magazine contributor, Stieg Larsson, had written a few novels before his death and they were printed posthumously. These …

The Girl with the Dragon Tattoo review

Journalist, publisher and part-owner of the monthly magazine Millenium Mikael Blomkvist meet Henrik Vanger, a retired industrialist and former CEO of Vanger Corporation to resolve a murder of the Vanger family and Harriet's loss. Lisbeth Salander, a surveillance agent with Milton Security, hacks into Blomkvistâs computer. Her new guardian Nils Bjurman physically and sexually abuses Lisbeth. Mikael discovers and seeks the person who tapped into his hard drive. Both team-up to solve the case and the real perpetrator erupts and explains everything to Mikael.

A film that needs patience since it starts slow but eventually picks up as the case is further explained. The score was appropriate, screenplay superb and performances (especially the female lead) were incredible all …

No posts have been made on this movie yet. Be the first to start talking about Girl with the Dragon Tattoo, The ( MÃ¤n som hatar kvinnor )!