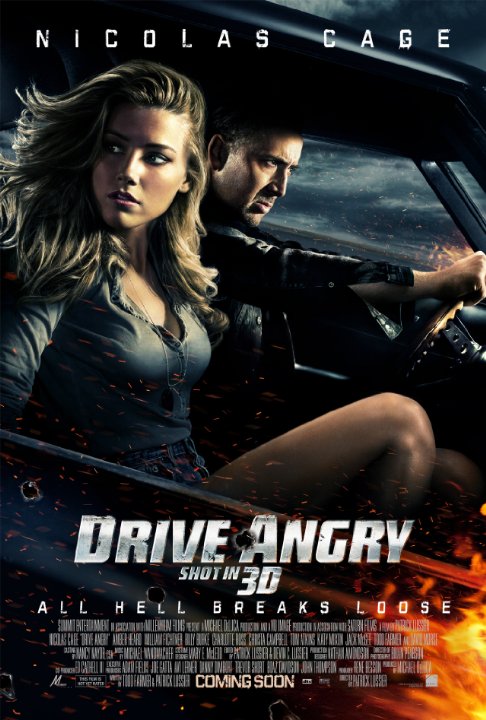 Plot: A man will stop at nothing to track down the men responsible for the cult responsible for his daughter's death and the kidnapping of his granddaughter. Not even hell can hold him as he escapes to seek vengeance, but hell sends their own tracker to find him, and he won't stop his mission either. -- Chris Kavan

Well this movie has one thing right how I feel about this movie and that is angry.

This movie is another self-satirizing Cage flick. EXCEPT, this one is actually very fun to watch. Don't take it seriously, and enjoy the action, outlandish characters, and fun atmosphere of this gory action flick.

You have to go into this film with a grindhouse mentality - if you don't take it seriously, you will have a lot of fun (R-rated fun - but fun none-the-less). It's over-the-top crazy, but what were you expecting? William Fichtner was excellent and Cage, well, Cage at least looked like he was having a good time.

This is a cheesy guy flick filled with hot chicks, awesome cars, guns and a badass soundtrack to boot. For some reason it reminds me of the movie "Shoot em Up" probably because both movies are about a baby.

Nicolas Cage stars as John Milton, a haunted father who escapes from Hell to avenge the death of his daughter and rescue his granddaughter from satanic cult leader who is about to sacrifice the infant under a full moon.

The movie co-stars the gorgeous Amber Heard as Piper, a foul mouthed reluctant companion, Billy Burke as Jonah King, the stereotypical bad guy and William Fichtner in a scene stealing role as the Devil's right hand man called 'The Accountant'. It turns out that Hell is just a big prison for wrong doers and sometimes criminalsâ breakout but they are always …

No posts have been made on this movie yet. Be the first to start talking about Drive Angry!