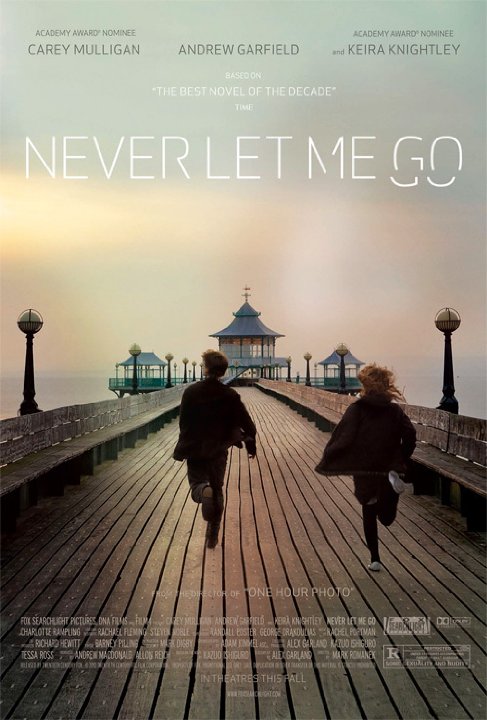 Plot: Three children who have spent their lives together at the same English boarding school must come to terms with their relationship and the harsh reality of life. -- Chris Kavan

What happened to f'ck it all from the movie frozen. Never let me go start off great and then the movie went to a turn that I did not like at all, this movie is a okay film and am always saying that but for this movie it is true. the acting was good I Did not find any Bad acting in the movie and the ending was pretty Sad.

This is an extremely faithful and moving adaptation of Ishiguro's fantastic novel. There are parts that play slowly that are more involving as written words, but, generally, the film excellently captures the melancholy meditation on life and death that is the film's central theme. Wonderfully acted and filmed.

"Never Let Me Go" shows the life of unworldly people. The drama of how their life were directed even before knowing the reality of it- and the resistance of getting off in it. Since the story was narrated and from the point of view of an unworldly character, the thought of the film goes through critical region. BUT I must say that the drama in it was sustained. What I actually like in this movie, is that it made me believed that it is a film based on a novel based on a true story. It moved me. AND the cast performed well.

And a new level of boredom is born.

Well, KingInTheNorth was right when he warned me of watching this film. I do not like it.

Now, I am very critical when it comes to the drama genre, my personal favorite. Especially when there is a romance story involved, one of my least favorite genres. This film's Wikipedia page, at least at the time of posting this review, says that this film is a 'dystopian science-fiction drama film'.
And let me just tell you, this film is about 10% dystopian science-fiction drama and 90% love triangle.

That's right. Around three lines of text at the beginning of the film sum up what has happened to this point, so we can concentrate on everything else that isn't important. That's all the dystopia and sci-fi you're going to get in this movie.

The direction and writing are both poor in …

AI and Surrogates without the special effects and with a love story angle. Kathy H (Carey Mulligan) recalls her childhood at Hailsham together with Tommy (Charlie Rowe/Andrew Garfield) and Ruth (Ella Purnell/Keira Knightley). Narration and score was good. Some scenes were a bit sluggish. Cinematography and photography were spectacular. Highlight would be Mulligan's performance and the brilliant screenplay. One of the best lines: Kathy - "We all complete. Maybe none of us really understand what we've lived through, or feel we've had enough time." and "It had never occurred to me that our lives, which had been so closely interwoven, could unravel with such speed. If I'd known, maybe I'd have kept tighter hold of them and not let unseen tides pull us apart." Never Let Me Go's intent …

Much weaker than the book!

I've read the book, so I maybe got an unfairly advantage over those who haven't but watched only the movie, but have I seen the movie first, I probably wouldn't even want to read the book. Because movie went in quite a different direction than the book - in my opinion - changed the characters and the way their relationships were. While watching the movie, I couldn't feel the connection with the characters nor understand their relationships as well as why do people behave like that to them - I was more frustrated by their passivity and submissiveness, which was nowhere to be explained except by their childhood brainwashing and electronic gadgets that kept them constantly under surveillance. But that things do not really explain why they didn't even TRY to change things - that's why the …

No posts have been made on this movie yet. Be the first to start talking about Never Let Me Go!