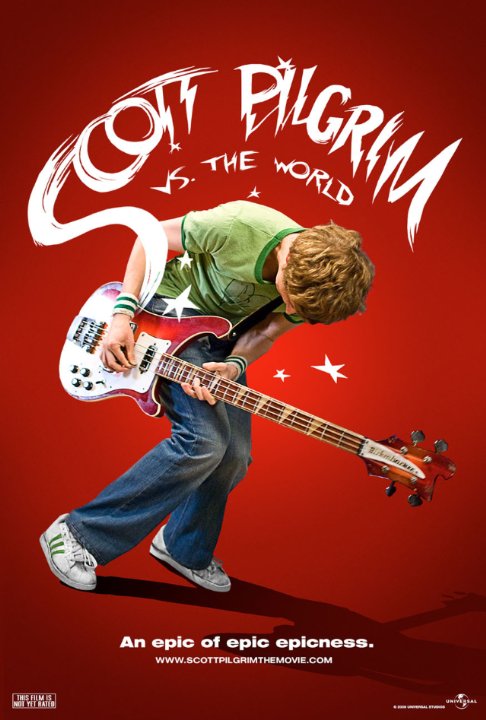 Plot: Scott Pilgram has found the girl of his dreams in the form of Ramona V. Flowers, but before he can get to her he will have to get by her seven evil ex-boyfriends. -- Chris Kavan

Scott Pilgram has found the girl of his dreams in the form of Ramona V. Flowers, but before he can get to her he will have to get by her seven evil ex-boyfriends. An epic of Epieness. Scott pilgrim vs the world. this movie flop at the box office and I do not know why.this movie has good visual effect's and the people that just love video games are just going to love this movie.

I know it might be wierd, but this is one of my favorite movies. It wasn't hard for it to catch me with the comic-like aspects, the fun rock music, the indie-romance between Cera and Phil, and of course the fight scenes. This movie plays out like an Indie-Video game. Very funny and fun. It is far from Cera's best work, but he still performed as expected, himself. This is a movie I feel everybody needs to watch with an open-mind as it is a little quirky.

Not my cup of tea.

Scott Pilgrim Vs. The World is a movie I don't really need to review, because user Yojimbo's review sums it all up.
It's a movie I was interested to see, because Michael Cera's style is very understated and quiet and I love Edgar Wright. The outcome: a sloppy one-laugh premise, sugar-coated with annoying special effects and uninteresting characters.
I think the main reason this film bombed at the box office is because it is very wrapped up in its own little world. This film is Strictly and Only targeted at retro gamers. I've played Mario Bros., I've owned a PlayStation 1 and while I don't consider myself a retro gamer, I understood the majority of the jokes and references to older games. But in today's society this film is so lost. That really took a lot away from the movie, because it …

I don't even know where to begin. First, I loved this movie. It was brilliant in its presentation and even under all of the effects, which there were many, the story didn't get lost. And in fact, they usually helped move the story along. Visually, this movie was stunning. If you are a fan of video games or comic books, this film is for you. I do have just a few questions though, SPOILER ALERT AHEAD:
1. Why did Gideon start the League of X's in the first place? And what exactly was the chip that was placed in Ramona?
2. When Scott defeated on of the X's, or their minions they turned into coins. Did this happen every day? It seems that it was just no big deal that the people were turned into a pile of coins.
I know sometimes I take things too seriously, and I need to just let …

"Scott Pilgrim Vs The World" by Yojimbo

A wannabe rock star slacker living in Toronto meets the woman of his dreams but finds he has to defeat her 7 evil exes to win her heart. To a videogame playing comic book nerd with a love of ironic humour such as myself, Scott Pilgrim (on paper at least) seems like the perfect movie. Essentially Chasing Amy dressed up with Matrix style visuals, it's a comedy that actually fails to deliver much in the way of laughs. The US sitcom characters were all rather unlikeable and annoying (Michael Cera in particular really needs to start turning the record over) and it's trying SO HARD to be self-consciously cool it's nearly giving itself an aneurysm. The plot is also next to non-existent, the big "growing as a person" revelation is Cera admitting that cheating on his ex and dumping her was a bit …

No posts have been made on this movie yet. Be the first to start talking about Scott Pilgrim vs. The World!