The Bridge on the River Kwai Movie Information 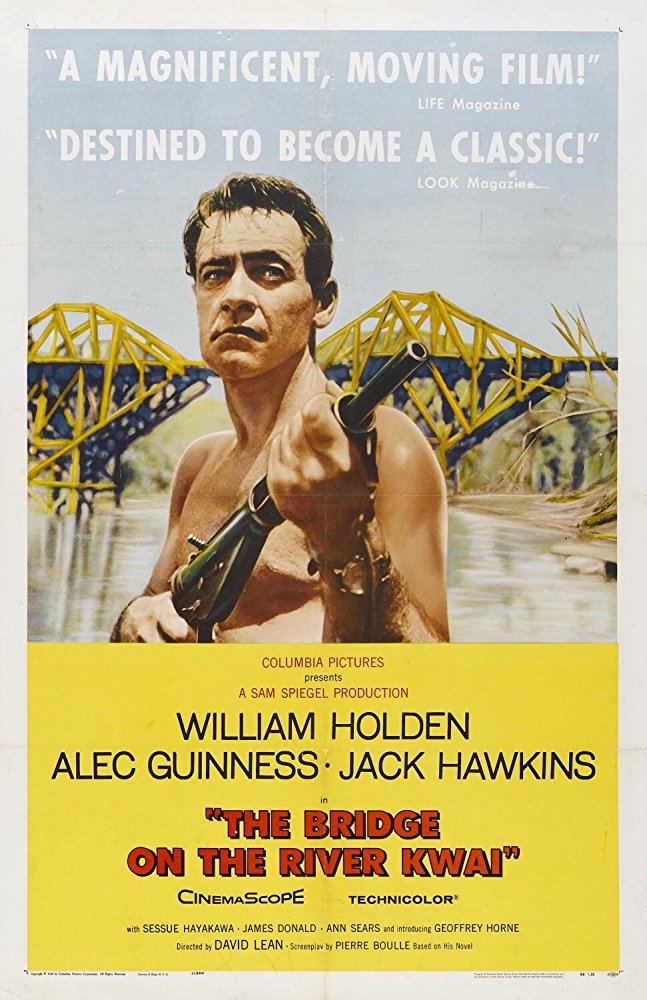 Plot: In a P.O.W. camp stationed in Japan during WWII, a Colonel (Guinness) convinces a Japenese General to build a bridge his way, which drives the Colonel insane.

It wouldn't be an overstatement to say this is one of the greatest and most important war films ever made.

Extraordinary. Few but David Lean would be capable of transforming a war story into a mainstream story with classic adventure elements, smashing performances and a climax so intense and influential that directors like Sergio Leone would grab immediately. It had been two months since I first saw it and I was still whistling the tune in the school hallways. "Madness! Madness!" 97/100

David Lean's mammoth WW2 epic often feels stretched too thin to justify its running time and that's because it is often stretched too thin to justify its running time. But the scale of the production and the strength of its cast are highly commendable. You have to see the cinematography and the action scenes to believe how wonderful they are staged. 'The Bridge on the River Kwai' is a decent enough war epic that is occasionally impressive but is mostly underplotted compared to its dazzling spectacle.

A war movie with something to say.

I'm a huge David Lean fan for two reasons:
1. I'm a huge fan of Doctor Zhivago.
2. I also share a birthday with him.

Considered an American war classic, The Bridge On The River Kwai has a high reputation going for it, and I can now understand why it was my grandfather's favorite movie, because it is phenomenal.
I always love it when a 'classic' surprises me, because there is always the chance that it won't be the way you want it to be or expected it to be. Nonetheless, I am so happy it turned out the way I wanted it to and furthermore exceeded my expectations.
Every character, every plot line, every shot from David Lean is polished to perfection.
The characters work because they have distinct personalities. Saito is vicious and proud, Nicholson is stubborn and persistent, Shears …

The Bridge on the River Kwai review

Viewing this again made me enjoy the finer details of the movie. A British World War II film involving an insensitive Colonel Saito (Sessue Hayakawa), tactical Lt. Colonel Nicholson (Alec Guinness), Major Warden (Jack Hawkins) , compassionate Major Clipton (James Donald) and resourceful United States Navy Commander Shears (William Holden). Film had excellent screenplay with quotes: Major Shears - "For what? How to die like a gentleman...how to die by the rules when the only important thing is how to live like a human being." Col. Nicholson - "But there are times when suddenly you realize you're nearer the end than the beginning. And you wonder, you ask yourself, what the sum total of your life represents." Cinematography was mesmerizing, performances solid and score endearing. Only …

"The Bridge On The River Kwai" by Yojimbo

A stubborn English Colonel locks horns with a similarly duty-bound Japanese prison camp commander over the building of a strategically important railway bridge during the second world war. David Lean's prisoner of war story is a tale of obsession, and it is the battle of wills between Alec Guiness and his Japanese counterpart that forms the core of the story. Examining the cliche of the British stiff upper lip, although Guiness' obstinate refusal to co-operate with the enemy gives his men the spirit to carry on, it is more his own personal obsession (bordering on insanity) than heroism that eggs him on. On the other side of the coin, it is William Holden's hustling commander, actually more interested in self-preservation (echoing his role in Stalag 17) who must show him the error of his …

No posts have been made on this movie yet. Be the first to start talking about The Bridge on the River Kwai!