Let Me In Movie Information 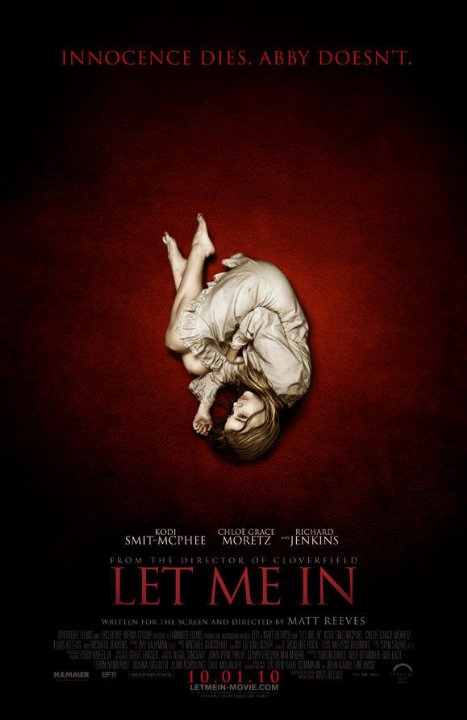 Plot: Remake of the Swedish film Let the Right One In: A young bullied boy befriends a new neighbor who happens to be a vampire. -- Chris Kavan

"Let the Right One In" saw a fresh take on the vampire genre, but this mostly tensionless American remake feels dry and well below the original.

The film is about a young bullied boy befriends a new neighbor who happens to be a vampire. This movie may not be as good as the original film but this movie was a bit slow but i liked this movie.

Most things that I wanted to say here is allready said by the other excellent reviewers here on this site. However I do want to share a couple of thoughts on this movie. This movie is put in the drama box, and I do agree to that, however I would absolutely not show this to or watch this movie together with children. The movie is slow paced, but for this one this is a good thing. You never get bored, because of the great directing and it got a very creepy athmosphere that keep on getting darker and darker as the movie progresses. This is a different take on the typical vampire movie where the movie focuses on the connection and the relationship between Owen and Abby.

This is the American remake of the Swedish film "Let the Right One In". It is difficult to watch this and not compare the two films, they both stand out as great pieces of work and both are fine examples of the vampire genre movie that is firmly miles away from the Twilight type stories. (No sparkling vampires here)

Kodi Smit Mcfee is wonderful as Owen, a twelve year old boy who is unmercifully teased and bullied at school. He is extremely lonely and dreams of one day getting his revenge. As he sits in the snow covered courtyard where he lives he meets another lonely person, a young girl played by Chloe Moretz (Kick Ass) who has just moved to the area with her 'dad' and they strike up a friendship. However Abby is no ordinary girl and the man she lives with is not her dad. She is a …

Is Abby a Vampire?

"Let Me In" is a thrilling drama which story revolves around a bullied boy, Owen, and his new neighbor, Abby- isn't a girl.

Okay. I heard or watched somewhere that this movie was actually a front runner on Oscar2011 nominations for best picture. Well, I must say, this one deserves a nomination. =D
At first, I thought it was kinda boring, until Abby (Chloe Moretz) came into the picture. It pulled me and got my interest that much. I would say the actors did well on their characters. The story is well constructed, but i think the writing (i mean the actual script) was in critical region considering it is an adaptation.

Over-all. It is something new,for me. Drama-Thriller-Fantasy executed well, with teens led it.

No posts have been made on this movie yet. Be the first to start talking about Let Me In!