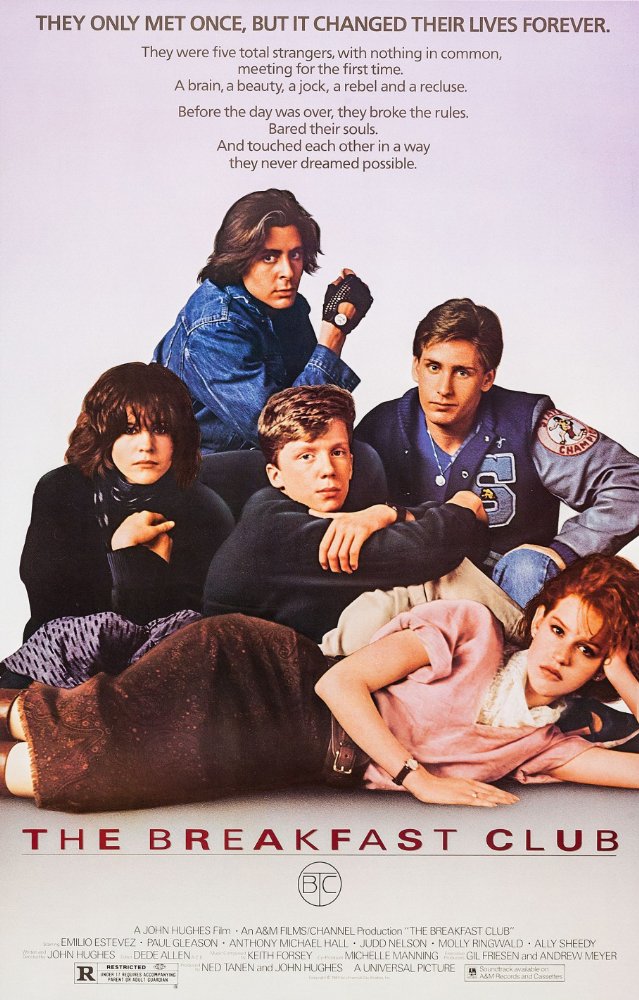 Plot: A group of diverse high school student spend detention together and find out they have a lot more in common than they ever thought.

A teen movie classic, "The Breakfast Club" came out at the height of John Hughes' career and was an instant success for its wisdom, authenticity, and eye-to-eye reliability.

John Hughes is more then a talented writer and director, he opened so many peoples eyes to see what life really means to you and make it precious because everything has to end. The breakfast club is still a 80's classic and it will always be.

This movie became an instant classic for its great portrayal of social life in high school. It is sweet and enjoyable, with very good performances around and great character depth.

The best high school movie of all time.

This movie is a feature of the typical high school stereotypes. The Brain, the Basket Case, The Athlete, the Princess and the Criminal. One might find the premise to be a repeat of every other high school movie, but where this movie sets different sails is the relationship between these individuals when they are confronted with all-day detention.
Whenever I finish a John Hughes movie, I get a warm feeling in my stomach of a mixture of feel-good, comedy, realism and satisfaction in general. And The Breakfast Club is no exception.
I adore every single bit of it. The characters are so relatable (even the supervisor Dick Vernon), the dialogue is quick and funny, the music sets the tone and it does a phenomenal job of maintaining a feeling of fun, even during the darker scenes.
There's …

Setting is in Shermer High School, 1984. A silent talented drawer kleptomaniac "Basket Case" named Allison (Sheedy) had nothing better to do, the popular "Princess" Claire (Ringwald) who got detained because of skipping school to shop, Brian (Hall) the "Brain" was punished because he had a flare gun that went off and wanted to commit suicide, Andrew (Estevez) "The Athlete" bullied a teammate and Bender (Nelson) "The Criminal" set off a fire alarm have been detained by Richard Vernon (Paul Gleason) for 8 hours. Each personality develop a bond finding out each others flaws and family backgrounds. Memorable quotes from the movie: John Bender - "Screws fall out all the time, the world is an imperfect place." Andrew - "We're all pretty bizarre. Some of us are just better at hiding it, …

Brat Pack at it's best!!

The way I judge the true quality and greatness of a movie is if I still find it as or more enjoyable today as I did when I first saw it. The Breakfast Club falls into that category. There's a reason that Entertainment Weekly listed this as the NUMBER ONE teenage movie of all time. I just saw this movie again a week ago, and was just as into it as I was in 1985. While it obviously has the dated 80s look in some of the characters (that's the way they looked back then; they can't help it) and music, the core theme of the film still resonates today.

It's about a group of disjointed, confused, and outcast youths who, in one way or another, are trapped by the circumstances of their schoolhouse cliques, family lives, and by themselves. But on one Saturday morning and afternoon while they are …

No posts have been made on this movie yet. Be the first to start talking about The Breakfast Club!