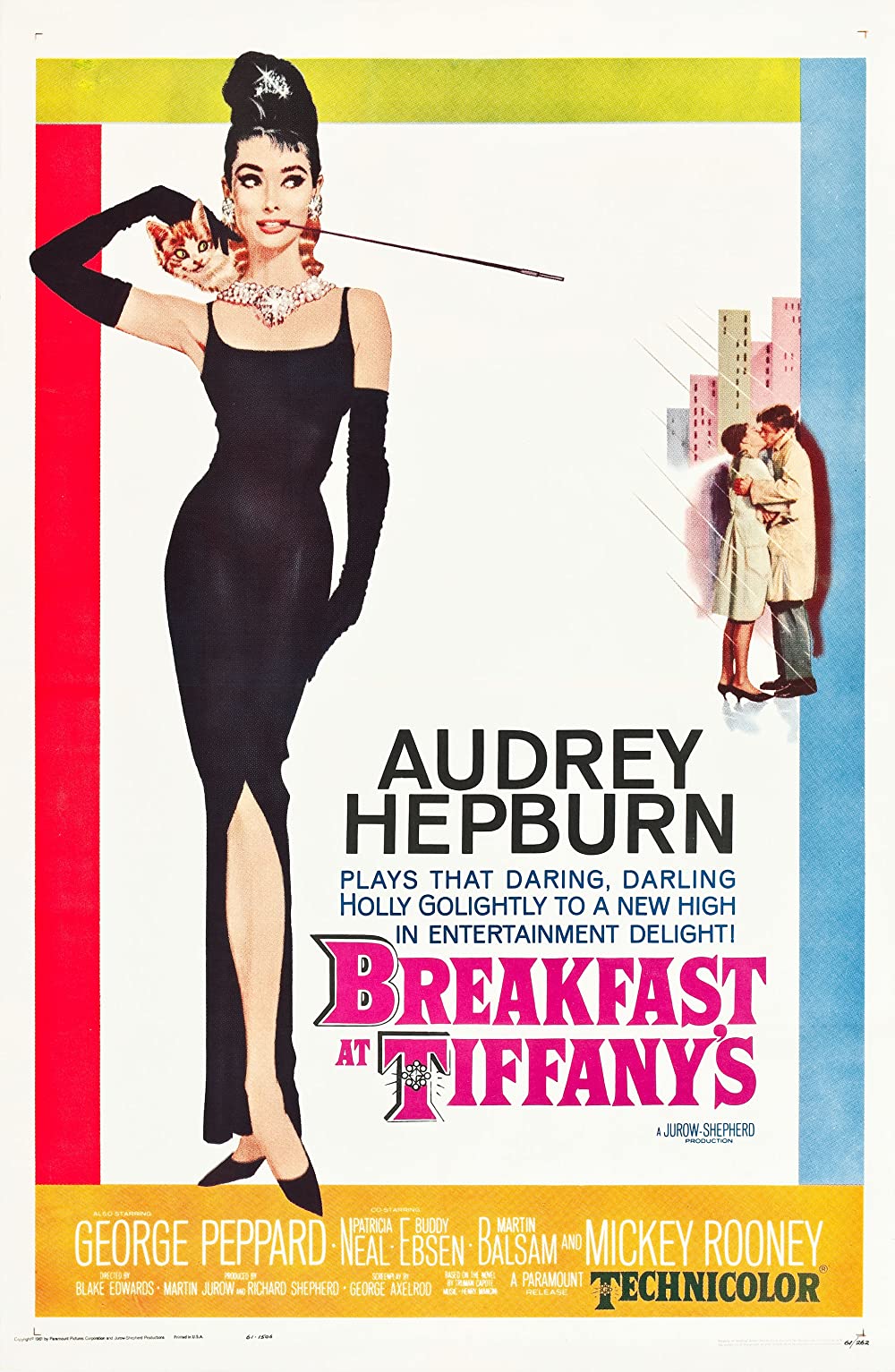 Plot: When a struggling writer moves into a New York apartment building, he becomes captivated by Holly Golightly. Her public persona as a sophisticated socialite is belied by her private life as a vulnerable woman. -- Chris Kavan

Insensitive Mickey Rooney caricature aside, "Breakfast at Tiffany's" charms past its imperfections.

A classic romantic comedy, glistening with 60's chic and dripping with the otherworldly allure of Audrey Hepburn as Holly Golightly, a rare character who is rich enough in depth and quirk to be worthy of the actress' talents. Many a fault it does have, from George Peppard's rather charmless love interest to Mickey Rooney's old timey, yellow-faced monstrosity of an Asian, but the easy charm of this movie will win over even the most cynical of souls.

Every scene with Mickey Rooney in it is incredibly racist, and therefore totally abhorrent. Other than that, though, it's a terrific movie..., a great movie in fact.

The only chick flick I own on Blu-Ray.

Breakfast at Tiffany's is my biggest Guilty Pleasure movie of all time.
I can watch this movie any time of the week. And if you think about it, it has a little bit for everyone, doesn't it? It has romance, it has comedy, it has a constant feeling of glowing. It just seems so comfortable. When jokes in movies aren't landing, but there still is a moment of silence where the audience is supposed to be laughing, I call it a sitcom without a laugh track. But here, even when it isn't funny, it feels like it is always flowing, coming along smoothly and letting the events sink into place.
Admittedly, it does have flaws. I'm not a big fan of the subplot of Holly's other identity back on her home farm, I just like the events that happen in the current, like the excellently-developed relationship …

A story that revolves around Holly Golightly (Audrey Hepburn), Paul Varjak (George Peppard) and I.Y. Yunioshi (Mickey Rooney). Rooney typically miscast for an irate Asian neighbor. Soundtrack was apt which in effect becomes eternal for a film. Hepburn's portrayal as a trickster was solid. Screenplay was decent which provided sufficient drama and laughs. Some note worthy quotes: "I'm like cat here, a no-name slob. We belong to nobody, and nobody belongs to us. We don't even belong to each other." and "I'd marry you for your money in a minute. Would you marry me for my money?" Another memorable aspect was the wardrobe. Overall, Breakfast at Tiffany's is considered by many as a classic for many reasons, Audrey Hepburn's stunning looks and acting is suffice.

Give Hollywood some grudging credit. To date, they've resisted the urge to do a remake of this classic. And it's a good thing too, because you truly can't improve on perfection. I mean can you imagine Nicole Kidman as Holly Golightly? Or Demi Moore? Or worse yet, the utterly talent-free Meg Ryan? Hopefully we'll never live to see something like that. Knowing this movie by reputation only I was completely unprepared for the effect it had on me. This movie has it all. Humor, pathos, characters who are wholly believeable(except for Mickey Rooney as a Japanese landlord! What on earth were they thinking?), and touchingly played-all the way down to the part of the Cat. The reason this movie works can be summarized in 2 words Audrey Hepburn. There simply aren't enough superlatives to describe …

No posts have been made on this movie yet. Be the first to start talking about Breakfast at Tiffany's!