Plot: Jess feels a strange sense of deja vu after her friends' ship gets capsized in a storm and they come across an apparently deserted cruise ship in the middle of the ocean. They soon learn they aren't alone, and whoever is on the ship with them intends to hunt them down one by one.

Interesting story that loops around itself. It's all one constant turn, until the final moments when it does make some sense. There are a few gaps in the 'how' and 'why', but the plot had my mind constantly at work and it was entertaining.

This type of movie has been done a million times before.You seen 1, Youve seen em all 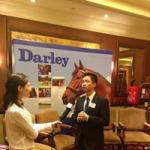 This is a great movie with a great logic in it!
I am Sylmaievnas. I recently watched this old movie. After that, I read quite a few reviews on this movie, including the ones from Douban in China and the ones from IMDB. I do this because I've been absolutely attracted by the excitement and joy of trying to figure out the logic of the world in this movie. I would say that I actually find a few insightful explanations made by other movie fans, but I'm afraid none of them is fully satisfying for me. So I decided to make this video and do my own explanation.
Basically, my theory is that Jess experiences 7 stages in one loop.
You can find out more in my video:
http://www.youtube.com/watch?v=uWZfHfQokMA&google_comment_id=z12xhliwevzeslm5p04cibnyfnadf1ozvdg&google_view_type#gpluscomments

A pleasure boat capsizes during a freak storm and its occupants are rescued by a deserted Ocean Liner inhabited by a mysterious stranger with murderous intent. Triangle is one of those cause and effect paradox stories that science fiction writers are so fond of and reminded me of The Butterfly Effect crossed with Back To The Future 2. Like Twelve Monkeys it obviously owes a debt to La Jetee, but as it concerns itself with the same five characters over the same 90 minute period, it seems far more like small potatoes than Terry Gilliam's film. The premise is simple, having a familiar Twilight Zone feel about it and because of this, once you twig the big twist you know exactly where it's going to go. It's funny, but I feel like I've written this review before...That'll be because it is …

No posts have been made on this movie yet. Be the first to start talking about Triangle!