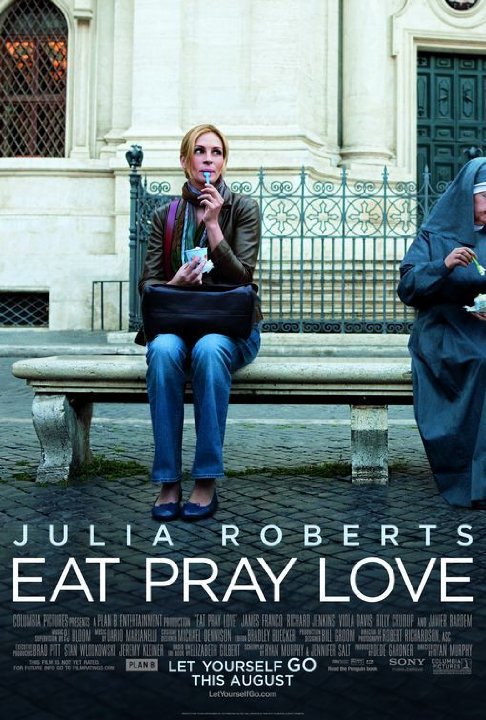 Plot: Based on the memoir by Elizabeth Gilbert. After realizing that pregnancy is not the way she wants her wife to go, Elizabeth Gilbert goes through a messy divorce then decides to travel the world to discover herself. -- Chris Kavan

I really enjoy this movie. It is my go-to movie when I am feeling sad. Julia Roberts did an excellent job portraying Liz Gilbert, a woman on a journey to learn how to live without a relationship. She travels around the world to do so. I suggest watching the director's cut, anyone who read (and enjoyed) the book will appreciate this version.

Sort of a bunch of really cute moments strung together. Some of them work. Most do not. I haven't read the book, so maybe the disconnected and sappy events of the film play better on paper. Really, did this have to be over two hours long? I was ready to check out after hour one.

couldn't get into the book, but I figured, Julia Roberts, oh I'll like it. Not one of my favorite movies of hers

I found this move insufferably long. By the end I honestly didn't care what happened to the protagonist.
I found her very vain and self-centered.
On a side note when movie descriptions say "messy divorce" I expect some kind of drama there. Like "under the Tuscan Sun" where her ex knocked up somebody else and the hoochie wanted the house, that's a messy divorce. This was a bored selfish harpy who wanted to leave her husband for no apparent reason. The man still loves her, he serenades her at the divorce proceedings and she just blithely bangs James Franco. Now if this movie had been from the husbands point of view, that would have been a messy divorce.
Instead we follow this over privileged woman as she meanders from Italy to India to Bali. Now I wont lie some of the shots in Italy …

This movie is uninteresting, which is disappointing, because I thought it would be extremely interesting, especially since the book did so well. It had all of the right ingredients: Julia Roberts, James Franco, Javier Bardem, Italy, India, and Bali. Unfortunately turned out to be quite the long and dull disaster leaving the viewer begging "Please, no more."

Liz Gilbert (Roberts) is unhappy in her life and her marriage. Feeling uninspired, she travels to Italy, India, and Bali for food, peace, and balance. Throughout her travels she meets a number of interesting people, much more interesting than she is for that matter, and in the end, falls in love.

The movie tended to be very boring, especially, when Gilbert was in the last two countries. There was nothing that happened to her …

Cultural Learnings of the World for M

So my wife and I decided to see this movie this past weekend for date night. Though it was not an amazing movie there were definitely a few amazing things about it.

The story is very average and Julia Roberts plays the same role that she always takes on. There are various other cast members that do a fine job in their own parts but nothing over bearing (though Richard Jenkins seems to shine more than the others).

But what I liked about it were the scenes in Italy and the beautiful landscapes that are shown in the other countries. There were some breathtaking views and some quality moments.

I was bored during most of the scenes involving India and felt the movie could have been about 45 minutes shorter (it has 2:15 run time, which is much too long for this time of …

can someone please upload this movie and please let me know when and where,hard movie to find