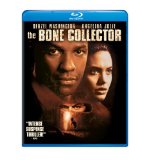 The Bone Collector is much sillier than it probably wanted to be but it's an enjoyable suspense movie with two good performances from Denzel Washington and Angelina Jolie. Its stylistic choices are humorously dated and the plot twists are nonsensical. But the villain's M.O. is genuinely challenging to viewers and should keep em occupied.

One of a seemingly endless stream of interchangeable serial killer movies that tried to cash in on the success of Silence of the Lambs. Efficient, but it involves all the usual cat and mouse games, clue-leaving and twists that are so utterly predictable and cliched by today's standards.

Not nearly as good as Deaver's novel, and the mysterious deletion of Thom's character is puzzling. All in all a clever thriller, with a fine performance by Washington. Jolie is outstanding as Sachs.

This crime thriller is quite different from the usual as the main detective on the trail of a sadistic and twisted serial killer happens to be paralyzed. Denzel Washington is wonderful as always playing a bright paraplegic who is in a state of deep depression about his condition and has lost the will to live.

But when a prominent couple is kidnapped and a rookie cop stumbles upon the body on a train track Denzelâs curiosity is piqued once more. Angelia Jolie is interesting as the inexperienced cop forced into what she is meant to do: forensic investigation. There's the usual friction at first that turns to admiration between the two. With Denzel's help, she investigates a series of murders related to the original body she found. The type of murders was very chilling and will make …

No posts have been made on this movie yet. Be the first to start talking about The Bone Collector!