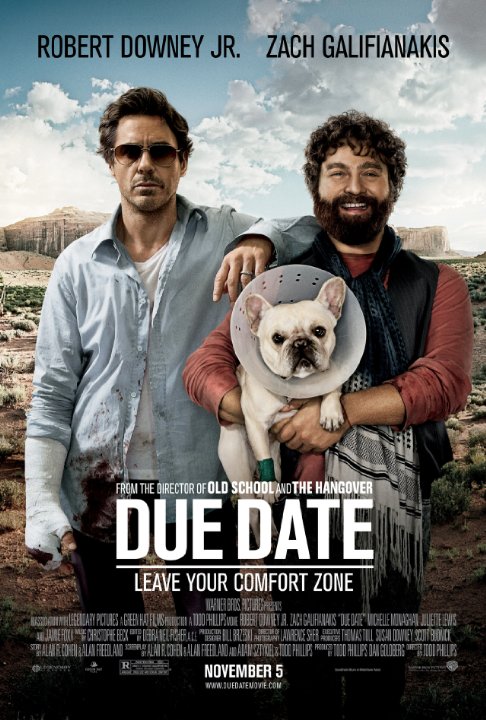 Plot: A high strung father-to-be is stuck on a road trip with an aspiring actor in order to make it to his child's birth on time. -- Chris Kavan

A high strung father-to-be is stuck on a road trip with an aspiring actor in order to make it to his child's birth on time. This movie feels like a remake of planes, trains, and automobiles, this movie was okay I mean Zach Galifianakis who his always playing the same roles in every like the fat idiot.

I HATED The Hangover so I expected to hate this movie as well but Due Date was so damn funny & even though I hate Jamie Foxx & go out of my way to avoid his movies, He wasn't as annoying as he usually is or I expected him to be in this 1 but maybe it's because I liked this movie so much

"Due Date" by Yojimbo

A bad tempered expectant father is forced to share a cross country trip with a flaky out of work actor when he finds himself stranded on the way to the birth of his first child. I really only watched Due Date because of my man-love for Robert Downey Jr. and I found myself wishing I'd learned from my experience with Anger Management. The presence of one good actor does not a good film make. Due Date is nothing more than yet another formulaic road trip from hell movie revolving around the deeply unamusing talents of Zach Galifianakis. Rather than featuring any wit or charm at all, it prefers to make references to (I refuse to use the word "jokes" as I consider what happens on screen here fails to qualify) weed smoking, masturbation, car chases and fist fights with "the handicapable". The …

Ill-tempered businessman Peter Highman (Robert Downey Jr.) is an architect and expectant father from Los Angeles who happens to be working in Atlanta. He is trying to make it home on time for the birth of his child because his wife, Sarah (Michelle Monoghan) is expecting him to show up at the hospital, but an unexpected problem surfaces when Peter has an altercation with one of the passengers of the plane, Ethan Tremblay (Zach Galifianakis), and both end up on the no flying list.

In need of alternate transportation, he accepts a ride from the irritating aspiring actor Ethan because he left his wallet with money and documents on the plane. Ethan is not the person with whom you'd want to travel with on the road from coast to …

No posts have been made on this movie yet. Be the first to start talking about Due Date!