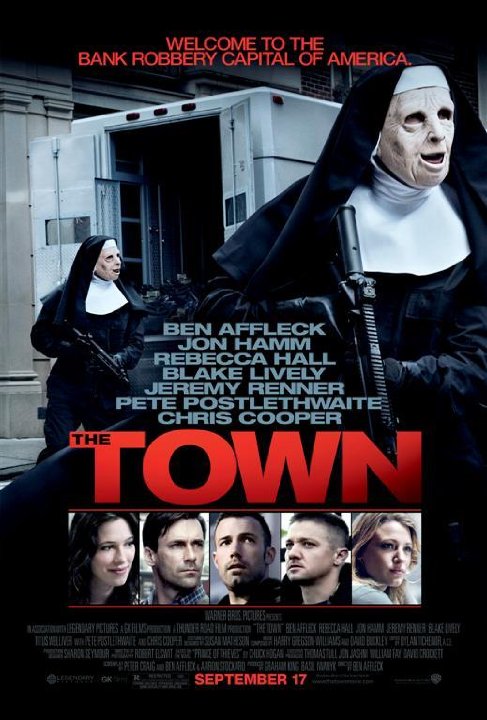 Plot: A man who robs banks for a living finds his life complicated when he falls in love with a bank manager he just robbed and took hostage, along with dealing with his crew and the encroaching FBI. -- Chris Kavan

Recreates but doesn't redefine heist movies of the 40s and 50s, but "The Town" still scores big when it focuses on its characters and their complicated, painful emotions.

A great film by a great director and underrated actor, Ben Affleck. The action sequences were great, it really put us in the middle of the action. My only problem was the ending, I think they all should've died at Fenway or he gets caught trying to escape. Also, what was up with Jon Hamm's hair?

I am really impressed by Affleck's directing. This movie turned out to be a well thought out and executed movie. I found this to surpass 'The Departed'. Believable characters and a thrilling ride. This is worth the watch and more. The shootouts and car chases make this movie an exciting watch, and the brains behind the writing make it a fulfilling one. I am excited to see more Affleck directed films.

I remember viewing this in theaters without any idea about the premise, and yet it delivered. Doug MacRay (Ben Affleck), James "Jem" Coughlin (Jeremy Renner), Albert "Gloansy" Magloan (Slaine), and Desmond "Dez" Elden (Owen Burke) are friends who rob a bank. Claire Keesey (Rebecca Hall), a bank manager who was held hostage, becomes close with Doug. A solid cast with sincere performances all around. Soundtrack, action sequences and direction was likewise wonderful. Screenplay was well written with some quotes from Stephen MacRay - "Making a change," either you got heat or you don't." Doug MacRay: "No matter how much you change, you still have to pay the price for the things you've done. So I got a long road. But I know I'll see you again - this side or the other." An effective …

Ben Affleck is Doug, the leader of a successful, accomplished bank robber crew composed of longtime friends who have operated as a group for some time. During one particular job, they grab a hostage Claire (Rebecca Hall) into the getaway truck just in case, but drop her off after they have shaken off police pursuit. Unfortunately she lives right in the neighborhood, hence a sufficiently significant risk for the gang to have Doug befriend her at a "chance meeting" to see if there is any danger that she might recognize one of them (despite their masks and her blindfold).

Predictably, a romance blossoms between Doug and Claire, but the gang's lethal member, Jeremy Renner, doesn't like it. And a tenacious FBI agent Jon Hamm draws closer to the boys' identities. He wants to bring the boys …

"The Town" by Yojimbo

A crew of professional thieves are threatened by the FBI agent pursuing them when he realises that the gang's mastermind has engaged in a relationship with a potential witness. I was extremely impressed with Ben Affleck's directorial debut Gone Baby Gone and was looking forward to this one immensely. This may have coloured my viewpoint slightly, but I found it a little bit of a let down. It's not that it's in any way bad; on the contrary, it's an extremely well engineered heist movie with a full compliment of solid performances, well written characters and dialogue. It's just missing that spark of originality and inspiration that made his previous film something special. It clearly takes a lot of cues from Heat, but the rather generic plot means it is a rather less layered and complex …

I feel that The Town had the potential for being a very good, or even a great movie right up there with West Side Story, but it fell woefully short of that potential, due to a mediocre cast, an immature script, an ending that fell flat, and the persistence of stereotypes, as well as many over-the-top shoot-out scenes. &amp;nbsp;I also dislike the message that The Town conveys to me personally; &amp;nbsp;that people don't have to be held accountable for what they do, and that anything goes.

The Town had me rooting for FBI S. A. Frawley and his men, and really wanting them to catch Doug MacRay and his boys and have them sent to a tough Federal penitentiary to serve long, hard time for their crimes. &amp;nbsp;Having said that, imo, there are at least three types of people who liked The Town, sympathized with and rooted for Doug MacRay and his men: &amp;nbsp;A) &amp;nbsp;Very naive people who aren't from the Boston area, and therefore are not aware of the really sordid, mean-spirited aspects of &hellip;

Nope: &amp;nbsp;I still think that the Doug/Claire romance, the overdone Boston accents and overdone car crash/chase &amp;amp; shootout scenes in Fenway Park and the North End, as well as the sappy, improbable ending were The Town's&amp;nbsp;biggest downfalls. &amp;nbsp;

Gone Baby Gone I watch the trail of the movie. Nice trail. I will watch the full movie.

Gone Baby Gone was a much better film than The Town, and Ben Affleck's brother, Casey, is a far better, more talented actor.