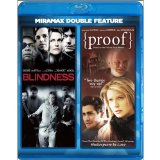 Plot: The wife of a doctor is the only one left to see the world around her. A white blinding sickness has spread throughout a city. A doctor's wife leads the group of blind people back to the real world, only to view the horrible life they now must live. This is their story.

Almost as great as the book. Will make you realize how precious are really many of the things we just take for granted.

i like this alot. mainly due to its originallity and julianne Moore acting made the movie great. it was good that it showed how a blind society could exit and its attack on the morals of governments and also the humans instincts and the tribal behaviour that can occur, the endind was good and i felt it fitted the type of film it was. i wish it had more money put in so it could be advertised to the public more as it could of done well at the box office.

I just saw this movie yesterday. I was very much moved by it. It played on many different themes:

How precious sight is to our everyday life;

How a person with sight among blind people has almost "godlike" power;

How when placed in such a situation we can descend into a "Lord of the Flies" existence;

How we can find something deeper and more precious through such struggles.

Like many others, I was a bit angry that Julianne Moore's character waited so long and late to act. She did not murder anyone. She EXECUTED a vile criminal in the absence of law of any sort. I know she is playing an utterly decent woman who is trying to be fair to all, but to allow the rapes and near starvation when she could have changed things is unfathomable...unless it is being used as a plot …

The logic in this film is truly astounding... and not in a good way. It wasn't a complete disaster, but it was so depressing and just plain wrong that I doubt I'll ever watch it again.&amp;nbsp;

I never did find out why they all went blind. It was an interesting concept and would have been better had they followed the epidemic in the world as opposed to narrowing the movie to this &quot;quarantine ward&quot; which makes no sense whatsoever. I couldn't grasp the point of walking ten-twenty-fifty blind people into a room and then just leaving them there... And then they just walk out! (I'm pretty sure I would have tried this BEFORE I succumbed to a dirty gang bang) and find the entire world has &hellip;

rob roy I agree 100% with you. I saw this movie a few weeks ago and was so confused. I stuck it out all the way to the end just to find out what caused the &quot;blindness&quot; and how and why their sight was being restored.....they never say. If you hadn't just now mentioned allergies, I would still be in the dark. Pun intended. The cast was semi-awesome and I am shocked that they signed on for this hole-filled project.

&amp;nbsp;Having not read the book i am not going to comment on what message the author may have been trying to make but i will comment on the movie. I understand about allegories etc but the movie didnt do enough to make that leap. This is just a movie about a bunch of blind people that has so many plot holes and logic gaps that i am angry at having wasted $1 plus tax from a red box as well as the time my wife and i took to be subjected to this. This movie makes NO SENSE. Why did Julianne Moore &hellip;

Oh yeah, same director as City of God. My friend read the book and said it was amazing. This will probably be one of the finer movies to be released this year, so I am looking forward to seeing it.