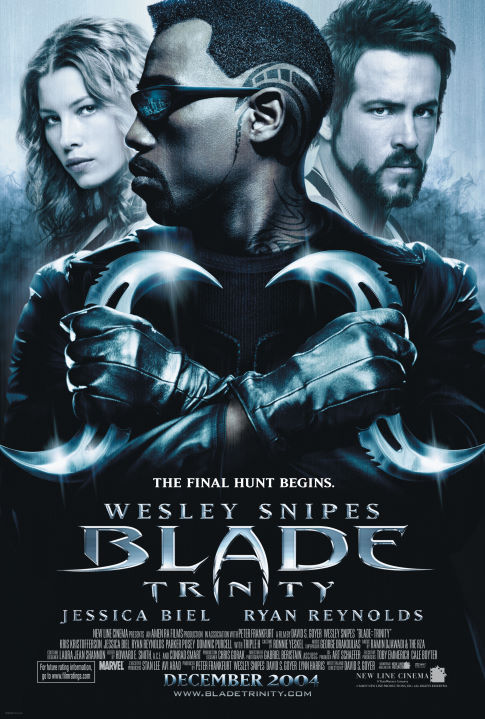 Plot: Blade joins forces with the "Night stalkers" and tries to take down a modern vampire clan that is harvesting blood.

Blade joins forces with the "Night stalkers" and tries to take down a modern vampire clan that is harvesting blood. This movie has horrible writing and annoying characters.

Hannibal King (Ryan Reynolds) and Abigail Whistler (Jessica Biel) introduces Blade (Snipes) to the Nightstalkers. Additional characters were uninteresting. King wasn't funny and Abigail tried to impress too much. It lacked the edge from the first two installments. This flick even tried to give Blade a some personality, which ironically hides it to keep him mystical in the previous films. Blade: Trinity fails in almost all aspects, a lackluster effort to cap the franchise.

Having Blade fight Dracula was a cool idea, but the actor who played him just flat out sucked. Ryan Reynolds managed to squeeze in his comedy schtick without any problems, but Jessica Biel's character felt needless. I don't much care for this end to the trilogy. The action scenes are what saves the whole movie.

Superman, Batman, X-Men...there must be some kind of unwritten rule that says in a superhero franchise, the second must always be better than the first, but the third MUST suck. Here Blade returns to see Whistler immediately killed off (after capping some policemen??), destroying the warrior/mentor relationship that drove the first two films. It is replaced by an iPod touting Scooby gang of catalogue models spouting lame wise-cracks like something out of a particularly witless episode of Buffy The Vampire Slayer. They set out to pursue the original vampire called Drake (can you see what they did there? It's like Dracula. But cool.) who they need to shoot with a special arrow blah blah. Inevitably there are some nice visual effects and cool ass kicking sequences, but all the wit and style …

"Blade" (Wesley Snipes), the part-vampire determined to rid this world of the threat of the blood-suckers, is back. This time, he must deal with not only vampires, but "Familiars," humans promised immortality by a vampire in exchange for a service of some kind, and "Drake" (Dominic Purcell), whom the world knows as the allegedly fictional character "Dracula".

However, this time, he has backup that includes former vampire "Hannibal King" (Ryan Reynolds) and "Abigail Whistler" (Jessica Beil), the daughter of "Blade's" mentor and vampire hunting partner "Whistler" (Kris Kristofferson). They are joined by "Abigail" and "King's" sleeper cell of a team of vampire hunters calling itself "The Nightstalkers."

The first thing that stands out of this film are the fight scenes. They are fast …

No posts have been made on this movie yet. Be the first to start talking about Blade: Trinity!