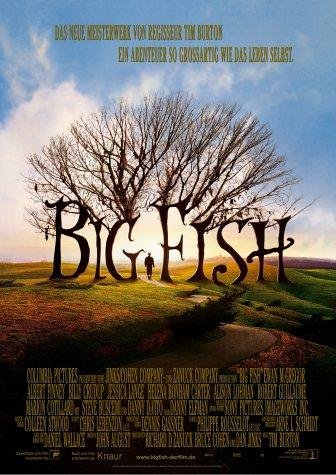 Plot: Edward Bloom is a sales man who is dying and wants to talk to his son. The son doesn't want to hear his tales and wants to know the facts about his father's life but finds out in his fiction there really is truth, in an adventure that only Tim Burton can create.

A visual departure from Burton's usual darker, or offset, color pallet. This is an unexpectedly bright fantasy drama. The narrative is essentially a collection of fables told from one man. All of them being fantastical tellings of his actual life events. The father/son relationship is poised as the emotional core of the film and it just doesn't hold. I found that the stories were entertaining in individual nature, but the collection doesn't connect at all with the dramatically mundane present day part of film. I enjoy the short doses of creativity and not much else.

A story of a man much like Forrest Gump, who have experienced a lot during his lifetime and his son, who has trouble deciphering his fatherâs stories if it is fact or fiction. The body of Edward Bloom (Ewan McGregor) started growing faster like a fish he read about in an encyclopedia. He became the townâs best player in different sports. A giant from his town of Ashton was being ostracized. Bloom was able to negotiate with the gentle giant to leave town, since it wasnât âbigâ enough for both of them. He was able to accidentally find a dreamlike village (named Spectre) where there are no problems, food and celebration galore. After seeing his future wife at a circus, namely Sandra Tibbleton, he mentioned that âwhen you meet the love of your life time stops.â He …

I've mentioned many times before that I love films that are about the power of imagination. This is one of those pictures but it does not completely lose track of reality. Instead of using imagination as its main weapon, it becomes the backdrop. What is at the forefront is family relationships, especially between a father who loves to tell stories to whoever he meets and a son that fails to extract the facts from fiction. Eward McGregor has a certain freshness and vitality that one cannot ignore. Every scene he's in, he seems to have that smirk that symbolizes a thinking man. Due to his charm, I was able to follow the story with ease and interest. Albert Finney is heartbreaking as the father that has stories for any occassion. He's the heart of the story because he is able to provide …

This movie was one that I bought without having seen it before. I enjoy most Tim Burton films and I was sure that this would be a good one. A friend of mine told me that I should see it, and I didn't really know what to expect, so I really walked into watching this completely blind. I am glad that I have friends that know my taste in movies, because this is a great film. Its reminds me so much of a classic fairy tale and yet it is completely original. The script was well written Albert Finney was amazing as the elderly Edward Bloom. Apparently Ewan McGreggor was chosen for the part because when Finney was McGreggors age, they looked very similar.
The story is nice, and the cast is great. It should also be known that this is the one of last big budget productions that Matthew McGrory …

No posts have been made on this movie yet. Be the first to start talking about Big Fish!