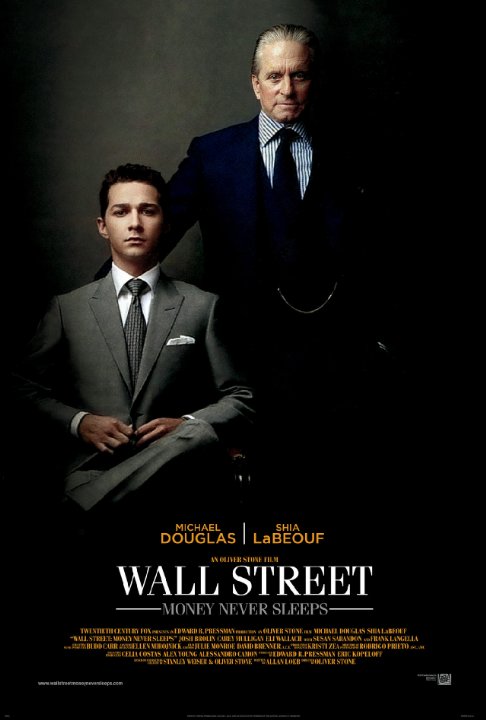 Plot: After being released from prison, disgraced Wall Street legend Gordon Gecko gets back into the game when a young trader, and his daughter's boyfriend, seeks his help. Despite the years, the game hasn't changed even as the economy teeters on the brink, and Gecko hasn't lost a step. -- Chris Kavan

Money can make you go crazy.

I didn't like the original to much & I didn't care for this 1 at all.If I had to choose between the 2 even though both versions weren't all that great, I'd say the 1st Wall Street was better

"Wall Street: Money Never Sleeps" is a story of a trader finds a mentor in a person of Gordon Gekko -once imprisoned and happened to be his fiance's hated father. OK. I can't remember why did I put it on to my "Movies I Want to See" list. Watching this film, it was as if I was waiting something to happen, but didn't happen after all. Boring one for me to watch. Or maybe, stocks, shares, bankers, (but not money =P ) and the like stuff just simply don't interest me at all. i didn't buy LaBeouf's performance here. And for Mulligan, well, she's been doing roles similar in here, no something new.

This film has its good and bad. For the good, it's great to see Gordon Gekko back on the screen again, even though he seems like a different character for most of the movie. The bad, this movie seems like it was a stand alone script that someone realized "hey, let's insert Gordon Gekko in here and make it a sequel!"

As such, some of the relationships don't work (Gekko had kids? Huh?). LaBeouf and Mulligan are too young to be as successful as they are. And once the film finally gets to getting us to the Gekko that we remember, by that time so many plot twists have happened that the film loses credibility.

However, like I said, it's nice to see Gekko again, and given Michael Douglas' health battles, an appreciation for his talents magnifies. If the original Wall Street is a movie …

No posts have been made on this movie yet. Be the first to start talking about Wall Street: Money Never Sleeps!