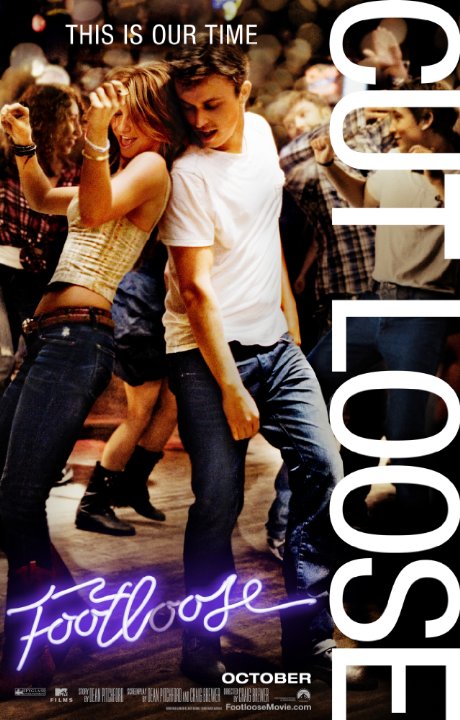 Plot: Remake of the 1984 in which a teen moves to a conservative town and shakes things up by breaking the rules against dancing. -- Chris Kavan

A remake of a messy 1984 film in which a teen moves to a conservative town and shakes things up by breaking the rules against dancing. This movie was far better then the 1984 because the movie didn't lacks on small little nick picks that I had on the 1984.

When a teenager guy moves in to a town where dancing is prohibited, he gets lessons of dealing with different people, adjusting with them, and to fight for what he thinks is right. *** I must say that nothing appeared really special about this movie, not the actors, not the story, nothing at all. But it did entertain me. I actually wished it was a musical, the dancing are really enjoyable which made me asked for more. Also, Willard made all the fun here. :) I am not sure if it's just me, but I think I saw "A Walk To Remember" in this movie, starts with fun suddenly broke by an accident, the reverend daughter and the "bad guy" of the town, the guy asks the girl's father's permission in the church, what do you think???

Blake Shelton, you're no Kenny Loggins

I don't have a problem with this film being remade, but I do have a huge problem with how it was done. There was a decision to try to appeal to both fans of the original and try to update the story. The result just doesn't work. A town banning music and dancing is much more believable in 1984 than 2011, and much of the lines in a modern time seem more cliche and unbelievable.

Of course, that's just a minor problem. The real problem is the fact that they mostly cast dancers instead of actors, moved the story to the south and countrified the music and characters, and clearly only have scenes because they were in the original. As a result you get poor acting, a story that's a mess, and just a disaster all around.

Entertains and captures the charm of the original!

Ren, (Kenny Wormwald) a senior in high school is sent from Boston, Massachusetts to live with his Uncle Wes (Ray McKinnon) and family to the small town of Bomont after his mom dies. The rude awakening comes when he finds out that Bomont has strict laws against loud music and dancing which was pushed by the Reverend Shaw (Dennis Quaid) after his son and four friends were killed driving home from a dance.

After a few run-ins with the law, Ren is quickly labeled as a "trouble maker" by the school administrators and Rev. Shaw which complicate matters when he falls for the reverend's hot daughter Ariel (Julianne Hough from DWTS) who shares his passion for dancing. Thus Ren decides to take on the town, what happens next well that's what you find out when you watch the movie.

As a teenager growing up in the 80's, the original 'Footloose' was the go-to movie for memorable quotes, classic dance moves, and the best all around "sticking it to authority figures" storyline a girl my age at that time could dream of. Imagine my pleasure, then, when a couple of decades or so later, a remake of Footloose has me feeling almost as giddy as my former 13 year old self-and the urge to get up and dance was calling my name---LOUDLY.

THE GOOD: I'll be perfectly honest and say that, although I loved the original version of the film, there is a part of me that feels just a little bit embarrassed when I watch it now---mostly because of the dated hair and clothing styles. And let's be frank: who dances like that anymore? I mean, besides nerdy middle aged people like …

No posts have been made on this movie yet. Be the first to start talking about Footloose!