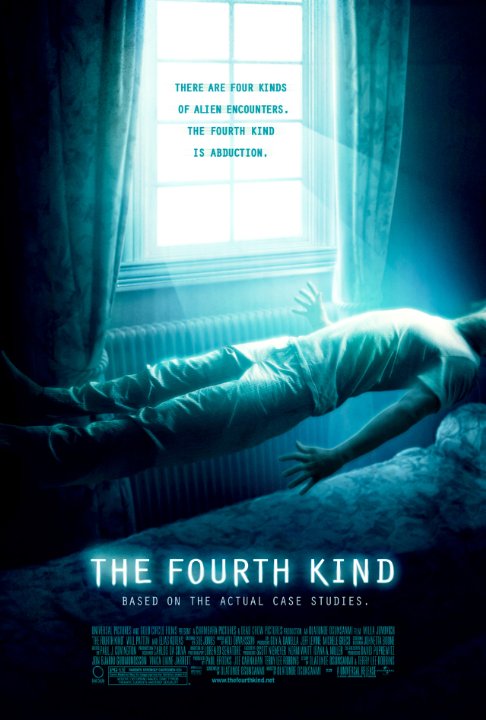 Plot: The fourth kind refers to alien abduction - in Alaska, since the 1960s, a disproportionate number of the population has been reported missing and investigations turn up nothing. Enter psychologist Dr. Abigail Tyler, who tapes sessions with her patients and turns up disturbing evidence of such abductions. -- Chris Kavan

One of the most insulting, misleading and false movie I've ever seen. I never liked the "base on a true story" thing that's in every found footage film, but The Fourth Kind pissed me off so much that I couldn't finish it, because the movie sloppily adverse itself as a "real life story" of these strange encounters that never happened. The dialogue is laughable, the acting was unconvincing and everything in this movie failed.

This film was being sold on the fact that it featured 'real' footage of abduction, but every single bit of it is blatantly fake and completely stupid. It's all a bunch of very strange and tediously long moments with a half assed story built around it. Waste of time.

Beware of the owlsâ¦donât fall asleep!

The film begins with a solemn little speech by Resident Evil star Milla Jovovich explaining how this movie is entirely true, (which immediately led me to believe otherwise) and she's portraying a real life doctor (Dr. Abigail) who went through the events that she's about to show. So I'm thinking "Ok, even though this is BS, I'll go with it". Apparently in a small remote town of Nome, Alaska a disproportionate number of the population has been reported missing every year. Despite multiple FBI investigations of the region, the truth has never been discovered. During her recent videotaping sessions with the traumatized patients she discovers some of the most disturbing evidence of alien abduction ever documented. And of course video is always distorted when in presence of alien race. …

This movie pissed me off. I love my horror and at the same time I love my documentaries. This movie takes the same premise of Blair Witch and pushes it to a dangerous degree. Durring all the trailers they proclaim that this is based on real events. At the start of the movie Jovovich comes out to proclaim that she is an actress brought in to portray this shockingly true story, backed by real events and evidence. They even go so far as to tell you to look it up, it's all true. When you do look up the information in fact there will be dozens of websites and articles written about it which makes you wonder how have I not heard of this before? Thank god for this movie to shed some light on this amazing happening I must have been sleeping through a rock durring. It's is only when you get to …

Ok this movie was great in it's own way. This movie is what I like to call a opinion movie. People are going to agree and disagree about this movie, are aliens real? My anwser is I believe there is a different life form out there in this world. I like how the director split the screen to show real footage and the actors and actress portraying as the real victims that's something you don't see done a lot. The acting was good made it really intense but the most disturbing thing was the real footgae if your not a believer after you see the real footage I don't know how you couldn't believe it. The Fourth Kind should rank up there as one of the better aliens movies to come out for people to see but it's actually based on real events and like I said before people will argue about it but your …

No posts have been made on this movie yet. Be the first to start talking about The Fourth Kind!