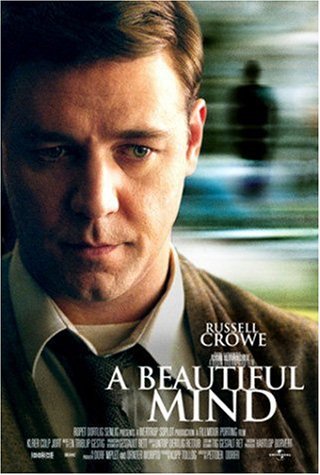 Plot: A genius mathematician takes a job as a code breaker during the cold war where he recluses himself to those around him, including his wife.

Russell Crowe and Jennifer Connelly are very good in this drama based off the life of troubled math wiz John Nash. It's too bad the film is more interested in his mental illness instead of his academic accomplishments.

Definitely a step up from Russell Crowe's underwhelming "Gladiator" the year before, "A Beautiful Mind" is a moving drama.

The story is about a genius mathematician takes a job as a code breaker during the cold war where he recluses himself to those around him, including his wife. The acting and the directing was brilliant and Russell Crowe was at his best in this movie. 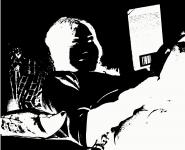 No point in being nuts if you can't have some fun.

This movie is about John Forbes Nash, a man obsessed to find an original idea with similar patterns in math, and the Nobel Memorial Prize winner in 1994 in Economic Science. The story is not entirely based on "The Game Theory", It tells mainly the disease suffered by his mind (schizophrenia), showing him in a mysterious border between his rarefied intelligence and insanity.
The movie travels through his unseen sickness which at the beginning helped him to carry himself. It grows up to the point of not knowing what is real and unreal. We can see that he has to review his interpretation about his life, sort out the shame and frustration feelings, discover his own problems, face it, accept others people help, start to doubt his own mind and carry on...
It is not a completely true biopic, …

This ideologically conventional yet wonderful biopic manages to be both haunting and deeply heart-warming at the same time. Veteran filmmaker Ron Howard conducts the plot with such a compelling sensitivity that will have most people drying up the tears on their faces while watching it. There are surprising plot twists, beautiful imagery and many touching moments. A solid, competent film that deserved every Academy Award it received.

"A Beautiful Mind" was named Best Picture of the year by the Academy of Motion Picture Arts and Science in 2002. Mr. Howard's achievement as Best Director was also recognized, along with another golden statuette handed to screenwriter Akiva Goldsman - in which is probably his best work to date - and last but not least, the magnificent Jennifer Connelly …

One of the greatest minds of our economical history was born in 1928. John Forbes Nash (Russell Crowe) went to school at Princeton University, where he met his best friend Charles Herman (Paul Bettany) and, later as a teacher, his wife Alicia (Jennifer Connelly). He later went on to work for a secret military operation run bye William Parcher (Ed Harris) and eventually win the Nobel Prize. His mathematical and economical work, and more importantly his personal life, are all covered in the Best Picture winning film âA Beautiful Mind.â

The film follows Nash and his battle with schizophrenia throughout his life in a formulaic fashion not unlike a math problem. Though the film does make up a lot of material, it does not seem to matter, because the film works as a great story in honor …

No posts have been made on this movie yet. Be the first to start talking about A Beautiful Mind!