Plot: A teen visits a mysterious show where he learns that vampires are all too real. After being bit, he joins the traveling show only to realize he may not be ready to let go of the life he left behind. -- Chris Kavan

Based on the first in a series of books that I have not read. This film plays like a Harry Potter wannabe, but it lacks any reason or substance. Here is a special case where it felt as if not enough of the book's material was present. The movie is too fast paced to tell it's own story. This thing sprints to the finish line, not giving us much time to enjoy what is happening. There's some creative ideas and visuals thrown about. Weirdly interesting side characters barely make an impression, which is a shame. In fact, the whole movie makes almost no impression. All that creativity put to waste, because 'The Vampire's Assistant' is completely forgettable routine fluff.

The premise had potential if only they had the right cast or a better script. It felt like watching a sitcom or a music video instead of a film based on the special effects. The characters of Darren and Steve were just plain dull and uninteresting. Even certain scenes where the spider was stolen, what was his main purpose? Unfortunately, the talents of Watanabe, Dafoe, and Hayek were wasted in Cirque du Freak: The Vampire's Assistant, just a another vampire flick.

After watching this movie, i felt like somebody drove a stake through my brain 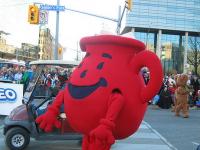 This movie really pissed me off. For one thing the acting was completely horrendous, the only half-decent person in the whole movie was that Josh Hutcherson kid. Also, please stop with the vampire movies. Can Hollywood be a little original for once? Another thing that pisses me off is that everything happened way to fast. One minute he's telling him he can't leave the campground, the next there fighting in a frigin' forest. The story was pretty decent, but it was ruined by the terrible acting and bad special effects. One of the only reasons I bothered to watch this movie was because of Willem Dafoe, one of my favorite actors. His name was put in the main credits, but he's only in two scenes! I'm not under exaggerating. Two, count em'. But the number one thing that pissed me off the most …

Better than what I was expecting out of a PG13 vampire movie but still suffers from fatal cliche flaw. Pretty much you know right off the bat when two characters start off as great friends and some weird shit comes along they are going to be arch rivals at the end of it. My super ex girlfriend did it, smallville did it, xmen did it better than anyone.... I can't decide if John C Reily is either brilliant or horrible in this part, which I don't think I can explain something you'd have to watch. He doesn't exactly look act sound or do seem at all like a 'vampire' but maybe in a way that makes his portrayal more unique. I can see they're trying to start a franchise here and while that usually annoys me when they assume their movie is going to be so successful to warrant sequals right of the …

First, it is very depressing to actually discover that the cinema where i watched this movie shortened it ( i figured it out when i see the trailer for the second time, there are scenes i haven't seen on the movie)- though i am not so sure because according to Nikkles, "I have a feeling parts of the story may have been cut out or glossed over to keep in all the action etc". BUT still, the movie is surprisingly - as Nikkles' term - amazing! The movie is very cool! i love to have it on DVD and watch it over and over again- haha! This vampire movie has a good story though Tiny's role was not that clear to me (does he just want to see war and people fighting???) , i love the way how Darren and Steve became vampires.

In general, the movie offers lots of amazing scenes. It is very …

To be continued by Elizabeth

No posts have been made on this movie yet. Be the first to start talking about Cirque du Freak: The Vampire's Assistant!