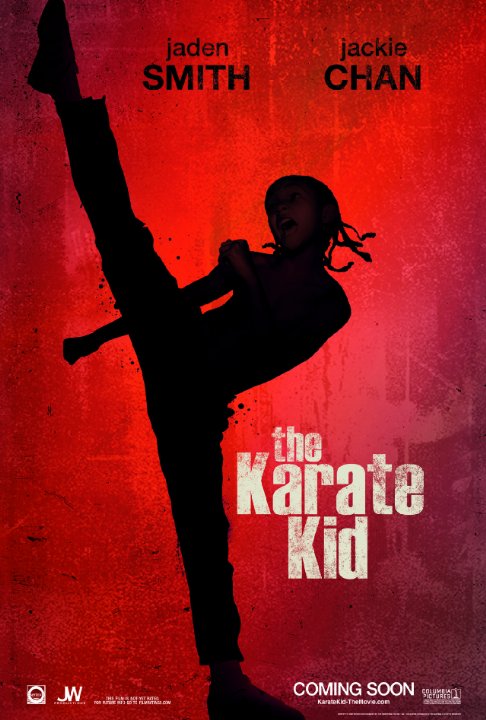 Plot: A man (Jackie Chan) helps and little kid in a karate competition.

I still think this movie should be called the "Kung-Fu Kid" because Kung-Fu and Karate are two very different styles of martial arts. I get the point that it was somewhat following the same story line as the first "Karate Kid" movie just replacing Karate with Kung-Fu. All in all it was still a descent movie to sit down and watch with the family. I did like that they took the story to China. There where some amazingly beautiful scenes.

When a man (Jackie Chan) helps and little kid in a karate competition. I thought this remake was going to be terrible, but this movie was actually enjoyable.

I felt the original was definitely better. Jaden Smith has a bright future and Jackie Chan becomes the disciplined master. Cinematography was pretty, score was decent and the cast did a good job. Unfortunately, the plot was light and story too predictable. The only enticing part of the film was the training. One thing I noticed, why call it The Karate Kid when they used "Kung-Fu" in the movie?

Itâs hard to believe the original âKarate Kidâ movie is already 26 years old and I had no idea what to expect from a remake of that original movie. Right out of the gate, we have a change of venue. Instead if importing oriental martial arts to the US, weâre taken to the land of itâs origins â China! We also get a standout performance from Jaden Smith (as in son of Will and Jada Pinkett Smith) who is the principal character in the film. While some may fault this remake for following the original story line so closely, I had no such qualms while watching it. The scenes and remolded characters were more than enough to make me feel like I was watching something fresh, even though I knew the gist of the story already.

Jaden Smith Will Have A Bright Future

Now that we are in the obvious era of movie remakes, it was time for a new rendition of The Karate Kid. This movie normally would probably not catch my eye, but then I heard word that Jaden Smith (Will Smith's Son), was going to be the next karate kid. This made me want to see if Jaden will follow in his father's footsteps as another good actor. I was impressed on how well he did and give him a lot of credit. The movie was enjoyable, a good story. And of course you can't beat Jackie Chan, who is always a good actor to couple into a movie. My only complaint is that the movie did drag during certain parts and was rushed in others. The director could have balanced that a little more to make an even better summer film. This movie is still good and worth seeing. I recommend it.

Watching this film is tantamount to admitting that you own a New Kids on the Block Album: pointless, embarrassing, and just plain stupid.

Because Hollywood is running out of ideas and just wants money!!!!!

It took forever for that damn trailer to loan. This movie is going to bomb! The first one wasn't that amazing and this one looks much worse. Why remake it?

Can this movie better Mr Miyagi's Karate Kid?As Jacky Chan is my favorite action hero, i really expect this movie to be a hit. From the trailers movie looks cool with some super stunts by Jaden Smith and Master Jacky Chan.Movie is going to be released on June 11th 2010.Trailer&amp;nbsp;References:http://www.fandango.com/t hekaratekid2010_48651/mov ieoverview