How to Train Your Dragon Movie Information 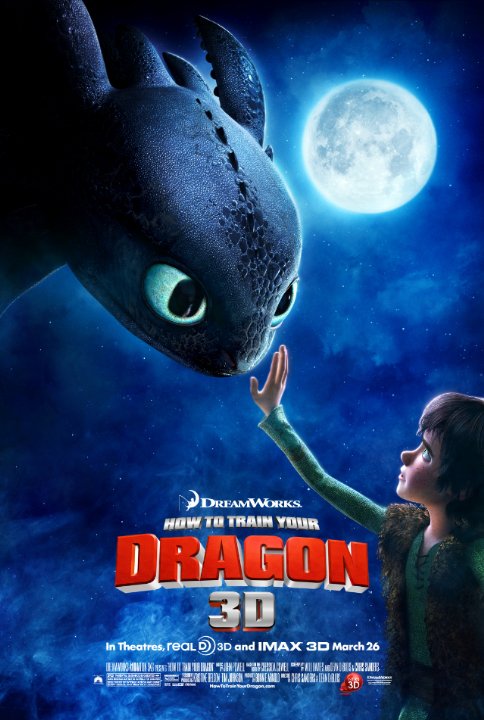 Plot: Based on the book by Cressida Cowell. Hiccup Horrendous Haddock III is the son of a powerful Viking chief, but is no hero. To prove his courage he seeks out the biggest, meanest dragon... only to end up with an surly, toothless runt of a dragon. -- Chris Kavan

Dreamworks Animation's best feature since "Shrek," the spectacular "How To Train Your Dragon" bears some of the studio's best animation and an imaginative and funny story capable of pleasing both kids and adults.

Okay you know how this goes, I talk about the first one and then the squeal comes out and I review that. This movie has beautiful animation and the 3D was actually pretty good.

With focus maintained on the well developed story and fantastic visuals, this animation film soars (literally and figuratively). It boasts exhilarating action/flying scenes, distinctly memorable dragons, and some charming moments. Engaging for all ages.

Fire breathing creatures existed once upon a time and now they have been never great before. With a soul stirring tale and some terrific animation directed by Chris Sanders and Dean Deblois distributed by Dream works Based on the book by Cressida Cowell and co written by Will Davies tells the heart touching tale of a young Viking who teaches a lesson that dragons are not meant to be harmed. When we all heard of dragons in the past flicks like Dragon Heart, Reign of fire, and Dungeons and Dragons they were fierce. Here is the different case. The skin is toned down and the scaly thorns on the back are completely reduced. Giving a cartoonish look to the scary dragons is a different approach and finally one can say that dragons were never so fierce. A 3D treatment is all it deserved and …

Hiccup (Jay Baruchel) is a sarcastic young Viking who wants to be "cool" and demonstrate the strong and fearless Viking traits, but he's scrawny and doesn't fit in as a dragon-battling Viking; and as a result isn't anything like his dad, an intimidating and fearless Viking warrior chief, Stoick the Vast (Gerard Butler).

Against the better instincts of his father, he is allowed to enroll in a dragon-killing class with the other young Vikings, including Astrid (America Ferrera) a beautiful young Viking girl that Hiccup has a crush on. In a desperate attempt to be noticed by both his Father and Astrid Hiccup actually manages to hit a dragon with a lucky shot, but of course no-one sees him - and more importantly no-one believes him. Desperate to prove himself to all Hiccup goes looking …

How to Train Your Dragon review

Hiccup is a cowardly by trying to fit in. His brave and strong father, Stoick the Vast, insults him for being so clumsy and causing trouble. Hiccup caught a dragon, a Night Fury that he named "Toothless," and discovers the real nature of this misunderstood beasts. This is a prime example of not judging a film based on a trailer. Unfortunately, I missed the 3D version, but nevertheless found the experience breathtaking in terms of animation, score and the story. It's excellence is evident from the awards it garnered and nominated. It's a story of maturation, father-son relationship, expectations, forgiveness, ending wars and trust. A few lines from the picture: Hiccup - "Everything we know about you guys.... is wrong." "We're Vikings. We have stubbornness issues." Stoick - "Either …

No posts have been made on this movie yet. Be the first to start talking about How to Train Your Dragon!