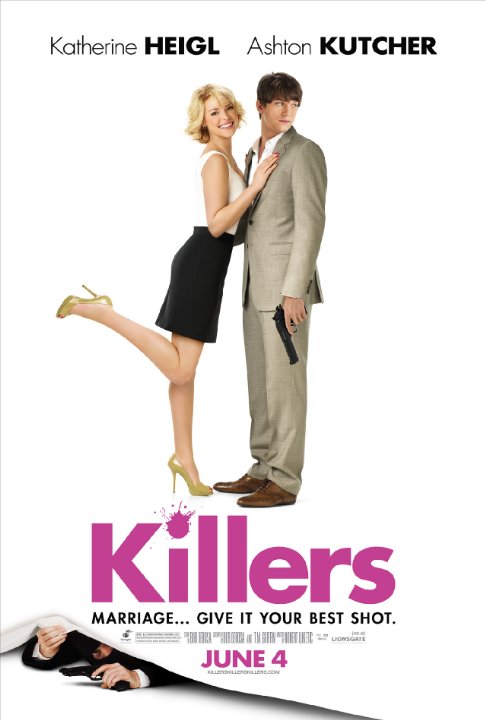 Plot: An assassin falls in love with a computer tech and leaves his gun-for-hire life behind for one of domestic bliss. Years later, on his 30th birthday he learns he's the target of a hit, and that the killer could be just about anyone: neighbor, friend, casual acquaintance and the couple must keep up appearances while staying alive. -- Chris Kavan

Not as bad as people say it is, but still not good.

usually i like the light romantic comedy, but this one was way too predictable! didn't even make me laugh, smile at best.. although i didn't watch the entire thing, had to turn it off after 45min, felt i was waisting my time. And i really like Katherine Heigl, and Ashton's not bad to look at, but the dialog was only ok and the plot less then ok.. he's a secret agent and the first night he meets her he tells her what he does for a living, i mean "come on!" even stupid comedies try to be a little bit more realistic.. there was just too much little things that bugged me..

I suppose if you in the movie for an action/comedy/romance kind of thing, this is a pretty safe choice. It's like Mr. and Mrs. Smith lite - I'm not a huge fan of either Kutcher or Heigl, but both managed to be... tolerable. Tom Selleck was a total hoot and probably the best thing about the movie. Competent but nothing more.

Jennifer "Jen" Kornfeldt (Katherine Heigl) travels to Paris with her parents. Mr. Kornfeldt (Tom Selleck) is the serious sharpshooter while his wife Mrs. Kornfeldt (Catherine O'Hara) is an alcoholic. Spencer Aimes (Ashton Kutcher) encounters Jen in an elevator and asks her for a date. Love angle was rushed, the number of killers and accessibility of guns were just baffling. Performances just lousy with the exception of Heigl. Everything feels forced and too cool, which unfortunately fails to bring out the humor and thrill. Some action scenes were nice, but the premise just too stupid to swallow. Kutcher was not believable and no on-screen chemistry was present. Even the background characters were annoying. Killers tried to combine elements of action and dark comedy, but is not …

No posts have been made on this movie yet. Be the first to start talking about Killers!