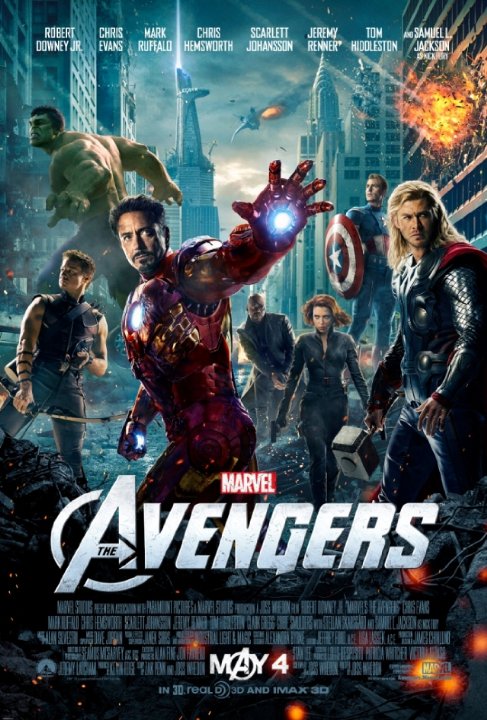 Plot: When an extraterrestrial invasion threatens all of mankind, the S.H.I.E.L.D. agency must bring together the world's greatest heroes in order to stop the threat. But before they can save Earth, they will have to learn to work together as a team. -- Chris Kavan

When you have an amazing team of actors with great chemistry both on and off screen, a team of directors who are passionate about what they do, and a production crew that's always coming up with new ways to reinvent the superhero genre, then you've got a successful film like this.

It takes more than just great actors to make a successful film so for the people behind the curtains making everything even more awesome, I want to give my thanks for blessing us with this masterpiece of a film!

Count on the Avengers to make man-tights and capes look more fashionable than ever! With incredible fight choreography, it's hard not to be impressed.

Based on the above, I figured I would end up liking this about 20%. I was wrong. This was truly a great piece of entertainment. Yes, this is a film based on comic book heroes, but their portrayal on the big screen truly was …

Remind me. Why does everyone love the Avengers?

When it was released I was pleasantly surprised by this movie. It had fun characters and acting, especially by Robert Downey Jr.
But I never thought it would be at this level of praise and admiration. It even holds the overall 47 rating on FilmCrave. Why?

I still stand by my original opinions of what worked in the film. The acting was phenomenal and the amount of story was just right. I especially liked the conversations between the titular heroes.
Actually, what I don't like is exactly what everyone likes.

The action is as overly stuffed and bloated as it can get. I felt like I didn't have time to breathe while everyone of these invincibles caused mayhem. Because that's what they are. Invincible.
At no point in the bombarding …

Nick Fury gathers Earth's mightiest heroes to form a response team when Asgardian demi-god Loki returns to spearhead an alien invasion. Joss Whedon is finally given a chance to prove what he can do with the appropriate resources to hand and in Avengers Assemble has created a rip-roaring rollercoaster of escapist entertainment that has all the ingredients of a first class summer blockbuster. Dispensing with his usual formula of wise cracks and pop culture references it begins as a fairly generic action fantasy, but as the heroes are introduced his skill for creating likeable characters and entertaining comic dialogue is framed within a plot which won't win any awards for originality but contains just the right balance of characterisation, comedy and eye boggling set pieces. Once again it …

The avengers is a wholesome gift for summer movie goers. There are lot of action set pieces, some hard hitting dialogs and great super hero the HULK in it, We get the best HULK smash in the film. Iron man is another cool character performed by Downey Jr. He and Ruffalo share excellent screen space understanding each other and arguing at times.&amp;nbsp;

In this Movie &quot;The Avengers to help save the Earth from Loki and his army&quot; and the rating is 8.5/10

Absolutely brilliant film, watching all the superheroes under one banner was no less than a visual treat, loved it!!

Great news, Joss Whedon is coming back to write and direct The Avengers 2 (plus a TV series?!)http://www.thewrap.com/mo vies/column-post/joss-whe don-signed-direct-write-a vengers-2-51101Color me happy - I thought the dialogue and interaction between characters was one of the best thing about The Avengers, and Whedon is great at that kind of thing. The series is in good hands, and though it's still quite a ways away, I'm already anticipating the results (don't know about this TV series &hellip;