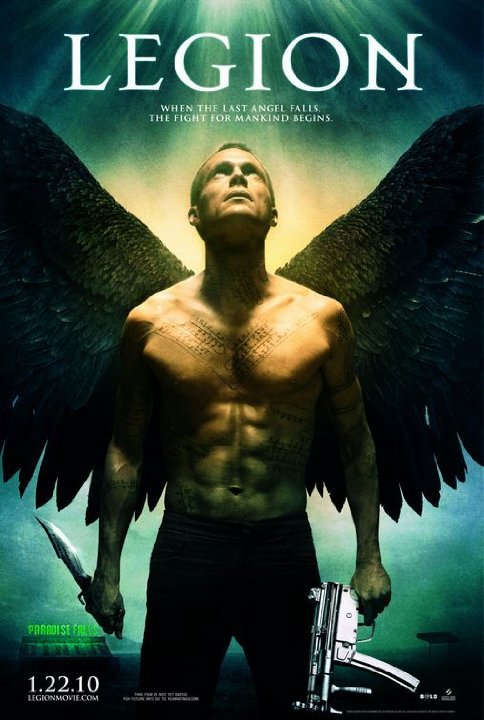 Plot: God has sent his legion of angels to wipe out humanity. Holed up in a small diner in the southwest, a group of strangers unwittingly find themselves as the last bastion of hope, along with the Archangel Michael, when the diner's young waitress is the vessel for the Messiah. -- Chris Kavan

A must see for lovers of action movies.

An isolated diner is besieged by a horde of the possessed intent on killing an unborn child who is prophesied to be the saviour of humanity. Another hokey action thriller based on religious mythology, Legion is actually pretty good fun as long as the bullets and fists are flying. Paul Bettany makes quite a charismatic holy warrior and the entire cast are pretty good in their roles as the usual Romero inspired zombie holocaust survivors. The format is very much in the vein of a heavily armed Night Of The Living Dead and it provides some stylish and exciting violence that's basically Assault On Precinct Exorcist. The biggest problems with it are that Kevin Durand makes a pretty bland nemesis and the fact that nobody ever bothers to tell us what the prophecy is or why the child is so …

Apparently Robert Frost was wrong. The world shall not end in fire or in ice, but rather a plague of banal characters, bad dialogue and a host of angelic-possessed mankind who turn into shark/Spiderman hybrids when angry.

Legion tries so hard to make the Apocalypse interesting. In fact, for the first half hour or so, it almost pulls it off. You have Michael, the former angel-turned lead farmer. Paul Bettany does his best playing the fallen angel and he's the best thing about the film. He's not on a mission from God anymore; he's on a mission to snap God out of his funk. You see, he's doing was God needs, not what God wants.

Then you have the restaurant at the end of the universe, sorry, I mean desert. You have an assortment of people, but all are cookie-cutter stereotypes: …

No posts have been made on this movie yet. Be the first to start talking about Legion!