The Book of Eli Movie Information 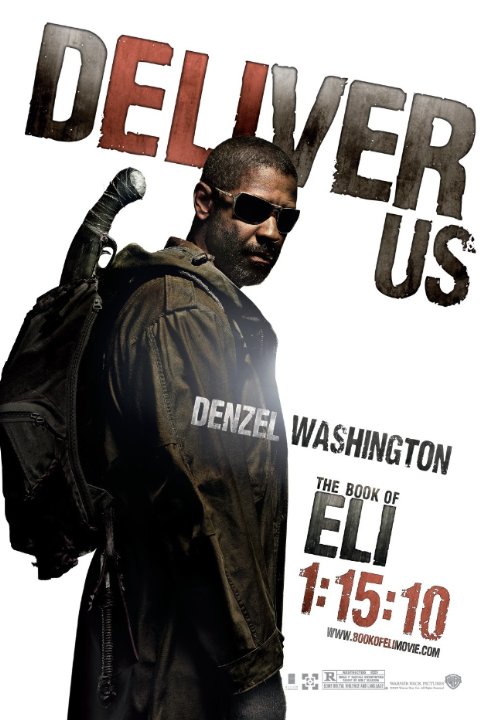 Plot: In a post-apocalyptic American a man fights to protect The Book of Eli - a tome which may hold the secret to saving humanity. -- Chris Kavan

n a post-apocalyptic American a man fights to protect The Book of Eli - a tome which may hold the secret to saving humanity. This movie is so grey to look and I am not kidding you the movie looks so dead inside. this movie has it's slow and boring parts.

The best thing about this movie were the fight scenes

Very strong beginning sets up what could've been a serious 'Road Warrior', but instead it falls to pieces in the middle only to be brought back together by one unforeseen revelation from WAY out in left field. I may have been more generous to my rating, if I had felt the 'twist' ending was just a little believable. It would make M. Night proud.

"The Book Of Eli" by Yojimbo

A lone traveller through the post-apocalyptic wastelands of the United States is pursued by the ruler of a ramshackle society who believes a book he carries is the key to expanding his empire. The Book Of Eli is basically a western done in the style of The Road. It contains the usual mix of desolate wastelands populated by Mad Max wannabes shot through high contrast filters, punctuated with occasional bursts of violence to keep the multiplex audiences in their seats in good time for the Hughes brothers to deliver their aimless sermon about the meaning of the word of God. Or something. Eli's book is a slightly clunky metaphor for organised religion and the idea of a malevolent ruler intending to use it to control the population for his own nefarious purposes is actually quite an …

In this post apocalyptic film, the world has become a lawless civilization where people must kill or be killed. The barren roads belong to gangs of cutthroats who rob and slay for water, a pair of shoes, a lighter, or just for fun. Washington plays a lone warrior named Eli, who travels with a backpack, a big knife, and a really good gun. Eli is charged with delivering his copy of a book, the very last remaining King James Version of the Bible, to a safe location on the West Coast of the United States. He stumbles into a lawless ghost town run by the villainous Carnegie (Gary Oldman) who is looking for a certain book. Yes fans, the very Book that Eli carries! Not because he's of a religious bent and wants to illuminate the minds of his minions with the glory of the Lord. He wants it …

Not One Of Denzel's Best

âThe Book Of Eliâ (TBOE) is yet another entry into the post-apocalyptic genre that is closer to 2009âs âThe Roadâ, than say âI Am Legendâ, or âTerminator Salvationâ. TBOE doesnât utilize CGI to paint armies of super-human zombies, or highly functional killer robots â the real bad guys are simply the pathetic desperate survivors of some world cataclysm. The film is about as sparse and muted as the landscape that is the backdrop for this somber tale. Most scenes are totally devoid of any color. There are several action scenes, but they are far and few between and play out much like some of the choreographed stuff weâre used to seeing in films like âThe Transporterâ. While the spare scenery and lack of jazzy effects make TBOE seem like a more realistic type …

No posts have been made on this movie yet. Be the first to start talking about The Book of Eli!