Season of the Witch Movie Information 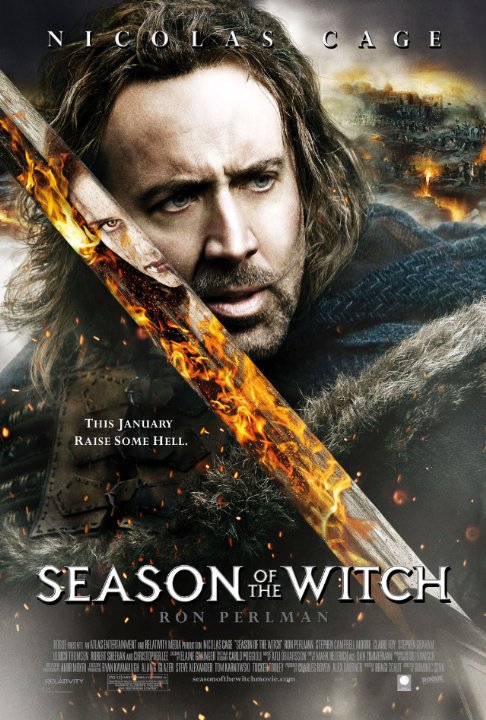 Plot: In the 14th century a group of knights transports a suspected witch to a monastery where they determine her to be the source of the Black Plague. -- Chris Kavan

Solid Nick Cage action movie with an interesting plot twist. This medieval saga has all you would expect and is worth watching if you have nothing else to do.

In the 14th century a group of knights transports a suspected witch to a monastery where they determine her to be the source of the Black Plague. this is one of those Nicolas Cage movies that are dark and funny at the same time and that is what this movie is.

This isn't the Nicolas Cage laugh-fest you would expect it would be. It is competently made and the period setting and special effects are actually above average. The film's main problem is that it is, at heart, lifeless. The characters go through a series of adventures on their quest, but there's really no connection to the characters, which results in a series of flat action sequences. The exorcism finale has its moments, but it can't touch the terror that is better horror films. As a whole, with a better script and director at its helm, it could have been interesting, but, as it is, it's a listless and muddy period horror film.

"Season Of The Witch" by Yojimbo

Two crusaders are pressured into becoming escorts for a suspected witch who is being transported to a monastery for trial. Season Of The Witch is a blatant attempt to jump on the Game Of Thrones swords and sorcery bandwagon, but whereas the successful TV show has a wealth of interesting characters, clever writing and excellent dialogue, this film has none of those things. True, Claire Foy is watchable as the Middle Ages' answer to Linda Blair. there are some attractive locations and scenery and Ron Perlman is always fun to watch. But the cod Olde Worlde dialogue - drawled in American accents - is clumsy and puerile, the plot cliche after episodic cliche and the combination of unsophisticated cinematography and poor CGI makes it all rather cheap and nasty. Thanks only to its brevity, …

Season of the Witch Review

No I'm not talking about Halloween III, this is actually a supernatural thriller about a handful of knights who must exorcise a Witch who was apparently the cause of the Black Plague. Sound cool so far? How about adding in the fact that the aspiration of the story is overbloated and never really works? How about calling it basically a road trip movie crossed over with a period drama? How about adding in really huge plot holes? For example, when did it ever snow in the Middle East? What's more the story seems to be taking an attempt at many different philosophic questionings and it never really seems to have the time frame or willingness to take stabs at them. In fact the ending of the film had me asking, "Who wrote this movie?! M. Night Shyamalan?" Probably a bit too much credit for Mr. …

No posts have been made on this movie yet. Be the first to start talking about Season of the Witch!