Cloudy with a Chance of Meatballs Movie Information 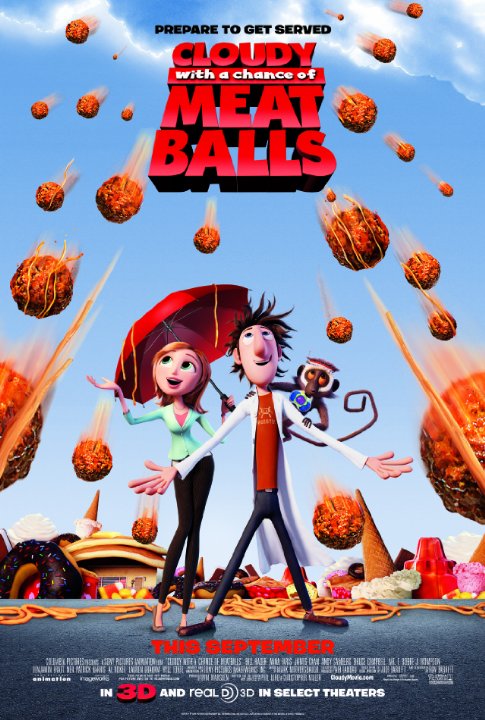 Plot: Based on the book - a town experiences food-based weather that works well at first, until things get a little out of control.

An impressive and original take on the children's book, "Cloudy With a Chance of Meatballs" is rebelliously funny and full of inspired animation.

The story is about a town experiences food-based weather that works well at first, until things get a little out of control. This movie has amazing animation and a good story that I did not see coming.

The premise at first seems ridiculous, but as you follow the story it all makes sense. The color, mood and graphics were sensational. So many likable characters like the scientist with dreams Flint Lockwood, the tough but sensitive cop Earl and Sam Sparks. The script is clever and the idea and images of over sized food just makes you hungry. Cloudy with a Chance of Meatballs is a joy to watch especially for food aficionado's.

there is a chance of success with these meat balls

When we see the best dream of lifetime where food comes down as rain and society start taking whatever they want, and order more food I can only say Cloudy with the chance of meatballs help. It composes funny cartoons and also some good looking father and son belief till the end where a person called as Flint manages to design a super machine that can convert water to food. I wished I had this machine in my real life. The movie is directed by Christopher Miller and written by Phil Lord. It is a 3D spectacle that can leave the viewers surprised by the gigantic food stuffs raining and hitting hard when danger approaches. Sony pictures manage to give another visual delight that is truly based upon the book with same title written by Judi Barett.
It is all about Flint (Bill Hader) a young …

Cloudy With A Chance of Meatballs is the story of Flint Lockwood (Bill Hader) an inventor who has yet to invent a successful invention. All this changes when his invention that goes haywire at a big event in the island town of Chew and Swallow causes it to rain any kind of food that a person could think of. This also brings weather girl Sam Sparks (Anna Farris) to Chew and Swallow to cover the raining food. We also are treated to great voice performances from the following people: James Caan as the father and voice reason to Flint, Mr. T as the townâs only policeman and Bruce Campbell in an hilarious role as the townâs mayor. As the food begins to fall the story becomes a tiny bit predictable but the writing is brilliant with lots of bits that tie up nicely by the end of the film and …

No posts have been made on this movie yet. Be the first to start talking about Cloudy with a Chance of Meatballs!