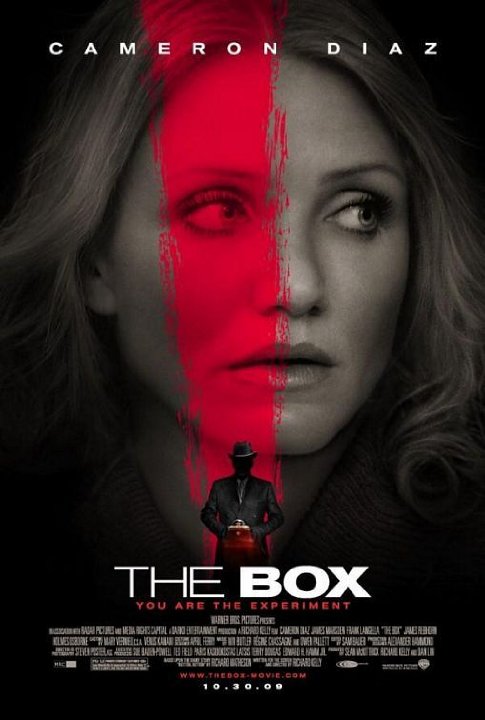 Plot: A couple receives a simple wooden box with instructions: press the button and they will get $1 million, but cause the death of another person somewhere in the world. With only 24 hours to decided, the decision will lead to terrifying repercussions. -- Chris Kavan

''what's in the box'' if you seen seven then you know what I mean".

The Box should stay closed

The Box is an extended episode of Twilight Zone with a mainstream budget, the extra cash making the weirdness seem all the more subversive. The story (based on a Richard Matheson tale) is a Faustian pact with buttons on, but that's just the starting point as it picks up Sartre and a heady dose of spiritualism along the way. I thought it got lost a bit in the mid-section but it may just be that it was playing with your head and not giving too much thought to mundane concepts like exposition. Nice grading give the 70s setting authenticity, splendid costumes (brown was the new black then) and art direction, too. Good to see Richard Kelly back from the void, proving that Donnie Darko was no fluke.

Richard Kelly is a poorman's version of Cronenberg and Lynch. Better than the odd Southland Tales but inferior to the brilliance of Donnie Darko. A respectable mystery mixed with horror and sci-fi elements. Norma (Cameron Diaz) and Arthur Lewis (James Marsden) receive a mysterious box on their doorstep. Steward (Frank Langella) explains about the nature of the box and makes an offer with a condition. Deaths occur and unresolved while the couple experience a different result after attaining one million dollars. Pace somewhat dragged towards the middle and the employers were never revealed. Cameron Diaz shows some dexterity with her acting here since it was heartfelt and authentic. The director always has a message but sometimes presented in a confusing or dull manner. Screenplay …

"The Box" by Yojimbo

A mysterious stranger delivers a box to the doorstep of a young couple and tells them that if they push the button on the device contained within, they will receive a million dollars but someone they don't know will be killed. This intriguing premise combined with a spooky performance by Frank Langella as the enigmatic stranger make for a compelling opening act to this story based on an episode of The Twilight Zone. Unfortunately, as is always the case with these twist based ideas, the reveal had better be DAMN good or else the viewer is going to feel like they've totally wasted their time. When it did come I didn't feel like I'd been cheated, but it wasn't exactly satisfactory either; the conspiracy aspect to the story felt forced and actually rather unnecessary and just made the story …

Converting classic twilight episodes is a shaky idea. Remember the 80's movie, which tried its best to retell four separate stories and ended with Dan Aykroyd turning into a were-thingee, which failed and killed an actor in the process? The Box isn't any better, though nobody dies (thank god!).

The premise behind the box is interesting enough: push a button and kill someone to get money. Too bad that all of a sudden there are aliens, salesmen with holes in their faces, and a huge conspiracy to test Earth's morality. This is the classic epidemic that's diseased Hollywood lately. Namely, too much of a big budget with big actors, and too little of story and quality to deliver on the investment. The original twenty-two minute episode is scarier and far more thrilling. This new bloated …

No posts have been made on this movie yet. Be the first to start talking about The Box!