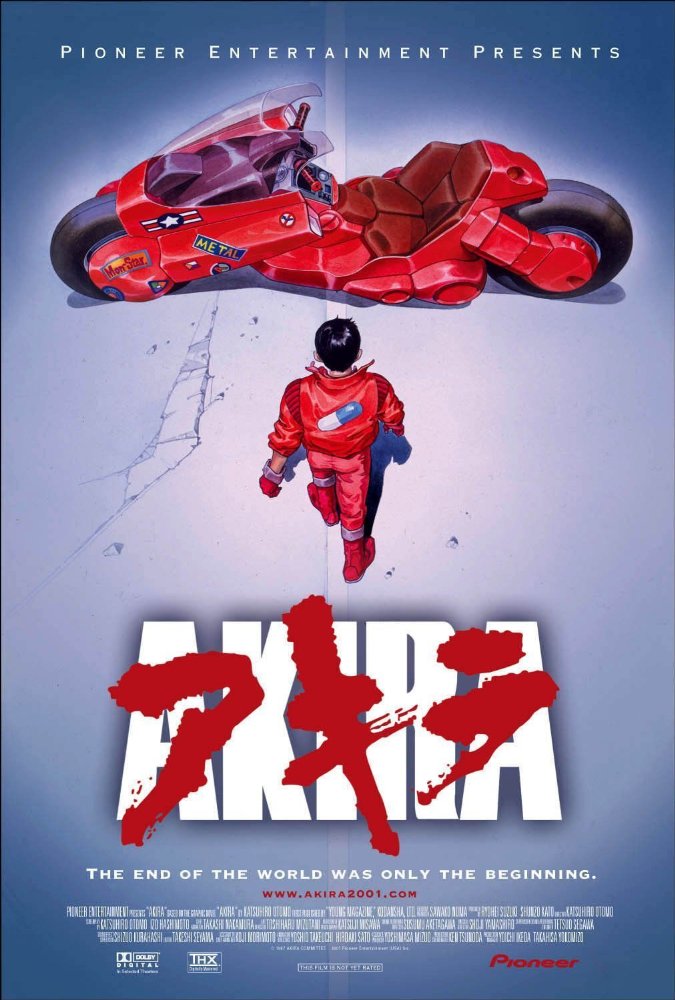 Plot: The future and Neo-Tokyo where the leader of a violent biker gang becomes involved with a shady military project that grants him amazing powers that quickly spin out of control.

'Akira' is one epic sic-fi anime. The animation still impresses with it's grand sights, bright colors, and attention to detail. The experience is immersive right from the opening shot. This is hand-drawn perfection. The story has themes of corruption through gained power, repeating past tragedies, and seeking a higher purpose. It starts off strong, but requires more attention to comprehend in the second half. Some explanations are muddled. The wild action is enough to overshadow that. This is one cool flick that all anime and sic-fi fans should check out.

This film is a trip! The visual style and animation completely adds to the dark, evocative atmosphere this film creates. It's a bit confusing at times, since the plot is sometimes nonlinear and mystical, but the imagery presented here is powerful. One of the best anime films ever.

In my opinion the definitive anime classic. Better than Spirited Away I think.

Think The Matrix, Blade Runner settings with Chronicle concepts but with more violence, swearing and slight nudity. Not any ordinary anime flick, this has numerous points to ponder after its initial viewing. It starts with a gang leader named Shotaro Kaneda (Mitsuo Iwata), who is friends with Tetsuo Shima (Nozomu Sasaki) and Takashi (Tatsuhiko Nakamura). Kaneda meets Kei (Mami Koyama), who helps her escape from prison. Colonel Shikishima (Taro Ishida) and Doctor Onishi (Mizuho Suzuki) discover that Tetsuo has similar powers of Akira. Things go wrong after Tetsuo utilizes his special gift.

Screenplay was impressive for its genre with lines: "School kids these days huh?" Col. - "It's to act or not to act." "It's utterly pointless to fight each other." and "The future is not a …

After the reconstruction of Tokyo after nuclear decimation, a young biker punk is kidnapped by a shadowy government experiment to engineer a "doomsday weapon" in the form of children with the power of telekenesis. Akira was the Japanese Anime that broke the genre into the global mainstream and is still hugely influential. It's essentially Godzilla for the cyber-punk generation as an insecure young boy is suddenly gifted the power of a god with the inevitable consequence of absolute power corrupting absolutely. The artwork is amazing in its detail, especially since it pre-dates CGI and is therefore hand drawn in its entirety. Some of the imagery is stunning, the finale owing a debt to 2001: A Space Odyssey and its hard to imagine The Matrix ever coming to existence without it. The plot is …

This ambitious, multi-million dollar animated adaptation of Katsuhiro Otomo's best-selling graphic novel series is spectacular, both on a technical and visceral level. A lot of effort was obviously put into making the animation as fluid and lively as possible, with stunning results. This gritty, post-apocalyptic tale about juvenile delinquents, corrupt government politicians, and a cautionary message about the misuse of supernatural powers is obviously targeted at a mature audience. Good thing, too, because the film contains an extreme amount of intense graphic violence, especially the last thirty minutes. Such scenes drove me away from AKIRA when I first saw the movie at the age of thirteen. To be honest, I disliked it. When I saw the movie again five years later, it wasn't the …

No posts have been made on this movie yet. Be the first to start talking about Akira!