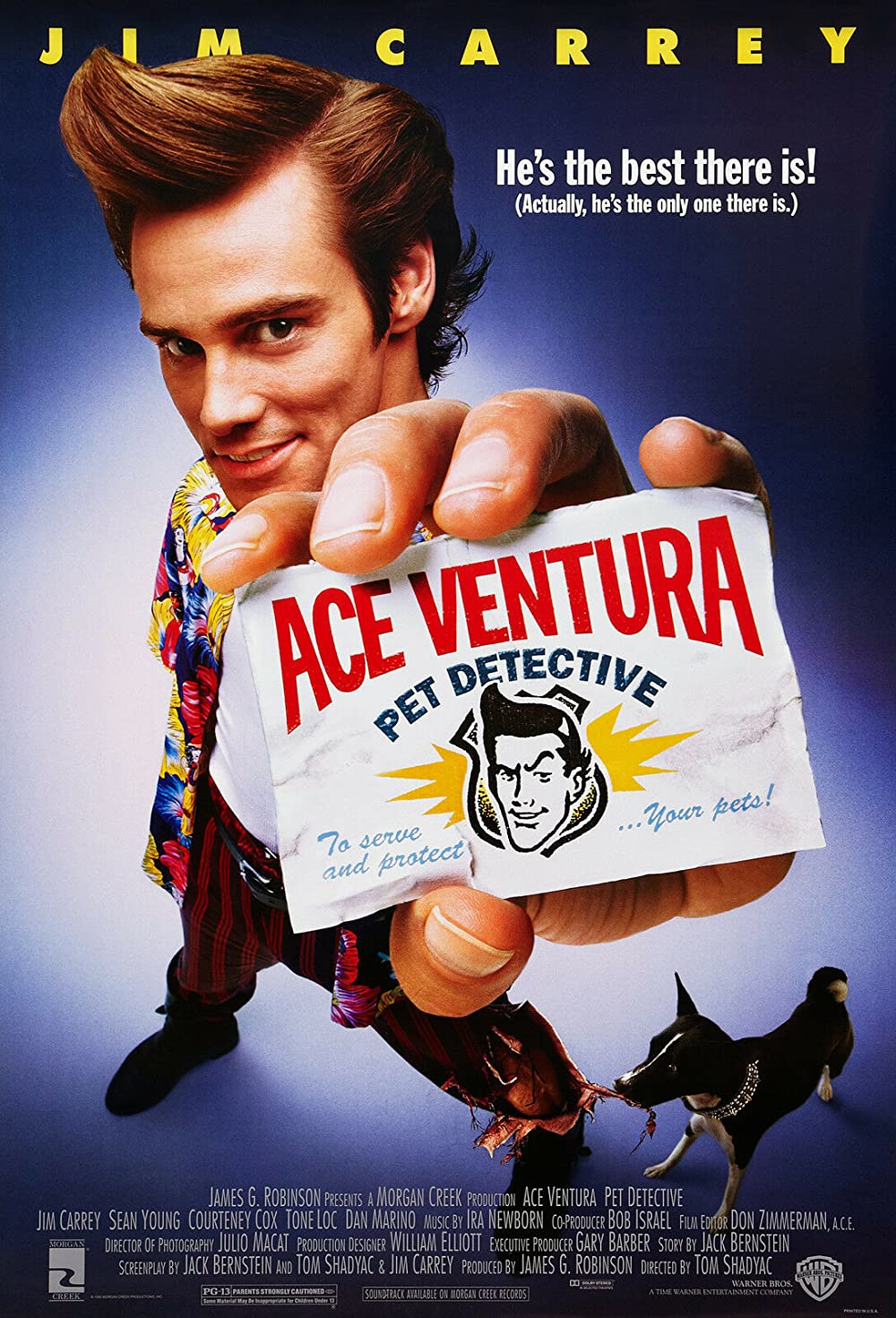 Plot: A wacky, off his rocker, pet detective is sent to find the Miami Dolphin's mascot.

jim carey at this best..funniest movie ever made..,this is the film everyone should see.i loved it.

The extreme and insane humor of Carrey has never in my life failed to disappoint. This has to be my favorite one of his. I know a lot of people who don't like this film, but you have to at least laugh once.

Yes, it took me 19 years to see this film. I remember when the movie came out, the commercials, the one-liners, just like it was yesterday. Jim Carrey was a comedic genius who burnt out very early. Not great, but funny non-the-less.

Who can't watch this movie and love the awesome acting by Jim Carey? I hadn't seen the movie in years and I watched it again recently. I noticed that all the things I do subconsciously come from this movie. If I leave a stinky bathroom, "Do NOT go in there! WHEW!", "Holy Sh*tballs!", "Set! Blue 42, Roverset! Hut! HIKE!". I can't get over this movie! I've probably memorized just about every line: "Soccer style kicker, graduated from Colleur High June 1976, Stetson University Honors Graduate, Class of 1980, hold two NCAA..." but I'll stop there. It's a classic. If you've never seen it, you're truly missing out on one of the greatest movies ever. (LOOOOSER!!) And if you have seen it. See it again. And again. And again. And again. ALRIGHTY THEN!

The Miami Dolphins were going to the Super Bowl again, but their dolphin mascot Snowflake has been kidnapped. Now itâs up to the worldâs best and only pet detective, Ace Ventura (Jim Carrey), in âAce Ventura: Pet Detective.â

Jim Carrey is one wild and crazy guy, even more so than Steve Martin and Dan Aykroyd combined. His humor is original and the moment you see it you know itâs him. To think, without Ace Ventura, he might not still be working.

Thatâs really all this movie is. âIn Living Colorâ was his launch pad, and âAce Ventura: Pet Detectiveâ was his ignition. The whole movie was obviously to get his humor out there and see if the public liked it on the big screen. Needless to say, it worked.

Itâs not a perfect movie of course. Besides the fact that …

Funny for kids, a lot less for adults these days.

When it came out this movie was hilarious. Jim Carrey was coming off of his fame as "the white guy" on In Living Color, and now he ran head on into the movie industry with a comedy that just let him be himself. When this came out I could watch it a number of times and never have a problem with it. The biggest thing is that because it was so popular it got over played. Everyone was doing their best impersonation of the character, and unfortunately they were all failing miserably at it even though no one was willing to admit it. If you haven't seen this movie before, then you were either living on a different planet, or in a coma for the last 15 years. Kids will love it, adults will find it funny at first, and then it tends to wear out.
Maybe I will watch it again in another 5 or 6 …

Favorite Movies That Take Place in Miami by The WHB

No posts have been made on this movie yet. Be the first to start talking about Ace Ventura: Pet Detective!