What Happens in Vegas Movie Information 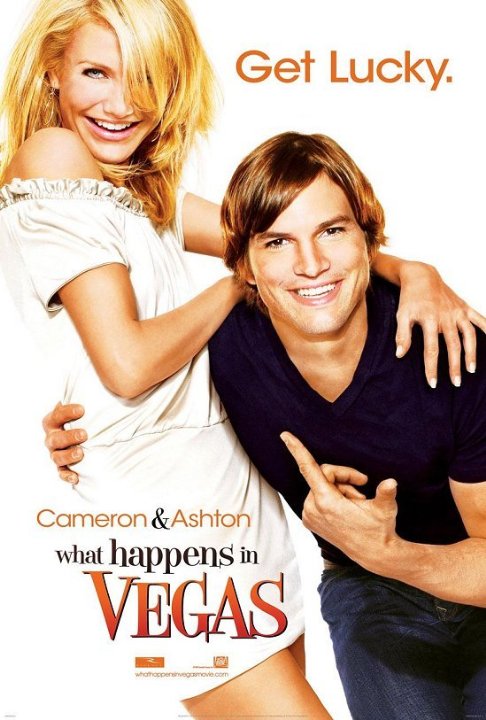 Plot: Two strangers hook up and get married in Vegas. Upon piecing together the night they realize that one of them one a huge jackpot with the other's money the night before. They stage huge schemes to get the money from one another and end up really falling in love. -- Josh C

Cameron Diaz is annoying in this movie.

I truly didn't mind this movie. It was kind of funny and a nice watch. Rob Corddry is the freaking man!

I had a hard time buying anything about this comedy, although it had a few fresh and funny moments. Mostly, though it is stale and unoriginal, while going for the lowest common denominator form of humor.

Jack Fuller (Ashton Kutcher) has just been fired by his own father (Treat Williams) and Joy McNally (Cameron Diaz) has been dumped by her fiancÃ© in front of their mutual friends. They go to Las Vegas to forget their sorrows. A few hours and many drinks later the two find themselves married each other.
When they wake up to reality they want to divorce but just as they're about to part ways, he wins $3 million on the slots, with Joy's quarter.

A cranky judge (Dennis Miller) puts a spoke in their wheel and sentences them six months of forced marriage together or else forfeit the money. They must visit a marriage counselor Queen Latifah and prove they are attempting to save the marriage. Jack and Joy decide to make the life of the other hell on Earth to force to get out of the marriage …

Set in Sin City, story revolves around two people who discover they've gotten married following a night of debauchery, with one of them winning a huge jackpot after playing the other's quarter. Unhappy pair try to undermine each other and get their hands on the money -- falling in love along the way

Well I don't watch films like this normally as from the trailer, I can see that I'm not going to like it. I was right and wrong. What Happens in Vegas is not a terrible film, nor is it a very good one at that. It suffers from lack of orginality and uniqueness. While the plot is slightly orginal at the beginning it falls under the preditcablity plot and you end up feel less satsified than you might have buying the ticket to see the film. While it seems interesting enough the film, for me it …

Not As Horrible As Most People Say

Itâs not as bad as critics and most audiences claim it is. I think this is one of those movies that became a victim of group think. Donât get me wrongâit did have forced humour (that either worked or didnât) and characters making stupid decisions right after anotherâbut none of it is meant to be taken seriously. Since I saw this movie via Netflix, I think I would have been a lot less figiving if I had seen this in theaters because it is not worth the ten dollars. I did enjoy the way Cameron Diaz and Ashton Kutcherâs characters would torture each other. As much as I would like to believe that people like them do not exist, they do. I learned to accept that fact and pretended that I was watching those kind of people interact with each other while watching this film. I thought …

No posts have been made on this movie yet. Be the first to start talking about What Happens in Vegas!