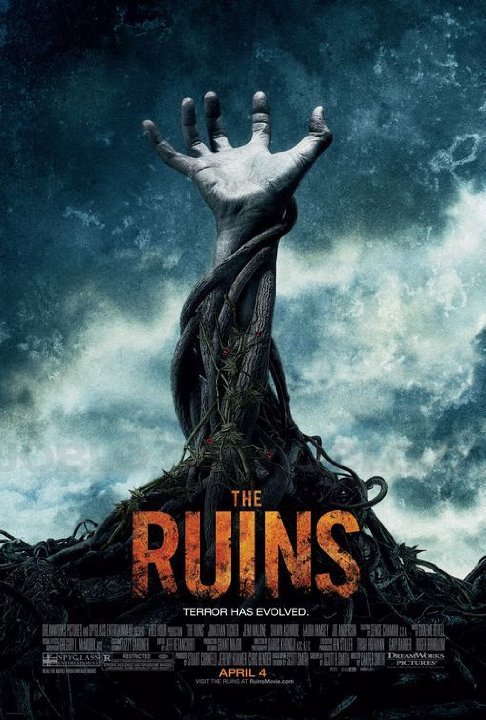 Plot: A group of students on vacation in Mexico get sidetracked by a German student who lost his brother. In the search for his brother they venture into the jungle and find old ruins where an ancient evil lives. -- Josh C

Different then any other horror flick Ive ever seen but not as good as I hoped.Still it was OK

Quite frankly, I don't understand how anyone could pay to see this movie. Despite its relatively short run time, it felt like an eternity watching this movie. I must state that I haven't read the book, but I don't see how this flick could possibly do it justice. The dialog was terrifyingly awful (just about the only thing about this movie that can be described as terrifying). The acting was sub par, which is surprising because Jena Malone is pretty decent. The only redeeming quality of this movie was the interesting visual effects. The monster flowers, or whatever they are called, were hilarious, but other than that, I wouldn't even wait for it to be shown on cable TV.

Most Underrated/Overlooked Horror of Last Decade

Some would unfairly categorize this as 'torture porn' because of the nature of the violence, but it is foremost a survival story with slasher elements present. It's less reliant on the usual cliches, as the situation becomes increasingly difficult to escape from. The gore looks believable. It's used effectively to emulate pain and mount fear for the next inevitable bloodshed. The actors are great at portraying the suffering, both from a physical and psychological standpoint. One character's mindset becomes severly broken and this leads to the film's most disturbing scene. Another positive note is the brisk pace and runtime. 'The Ruins' is a quick, gut-wrenting watch that could affect even the most hardened horror fan. Completely underrated!

The Ruins was one of the worst horror movies I've ever seen.

The story was one of the worst I've seen. Let's take a set of ruins, which were hidden by a covered up trail, where some people were quarantined because they touched some vines on the rocks. Then, those vines started to attack at kill them, after mocking the sounds they would make, like a ringing cell phone and yelling. I don't think that any plant could to that realistically, and there was no way they would stay on those ruins, even if people threatened to kill them.

The characters were not very realistic at all. The actors were bland, making the characters on screen seem surreal. Everything about the acting, characters, and their reactions to the problem almost seemed fake and forced as I watched. Some scenes were …

The end ruined this entire movie

Damnit!! I really wanted to love this film and almost did. Sure it didn't have the greatest actors, the plot was a bit shallow and Carter Smith hasn't really directed a notable film. Still -- I fell for the previews and the original story that looked mysterious.

Throughout the movie I was surprised at the gore but disappointed at the lack of genuine scares. I was still enjoying the movie, that is until the very end.

What the F$#K! It never reached a climax, it just ended. Nothing.... It was going just fine and then it was like a bad episode of Law and Order where it just stops before justice has been served. It desperately needed a climax and I can think of 100 ways to end this film that doesn't involve making the movie into a piece of crap.

So for all the directors out there …

Vacations from hell by Horrornut45

No posts have been made on this movie yet. Be the first to start talking about The Ruins!