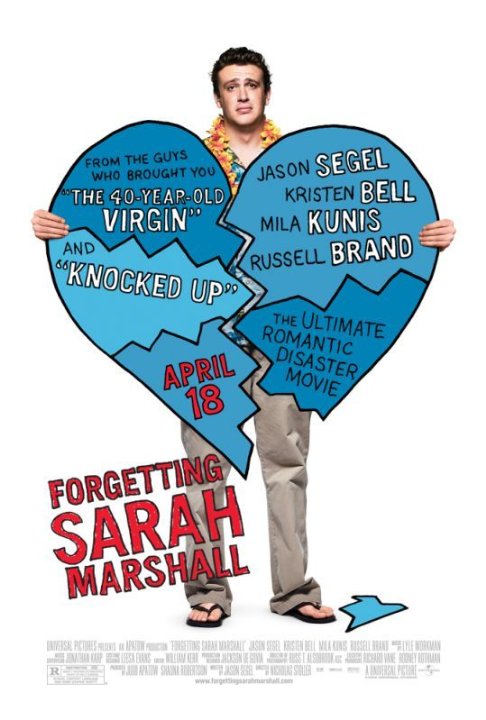 Plot: A young man his heart broken by his ex girlfriend who he can't seem to forget. His friends suggest making a trip far away to somewhere she would not be - only to find out her and her new boyfriend are staying at the same resort. His luck may have turned as he meets a nice young lady who is interested in who he is.

Our main character comes off as pathetic sometimes, but he's not unlikable. "Forgetting Sarah Marshall" is an incredibly funny comedy about getting over your ex.

The story is about a young man his heart broken by his ex girlfriend who he can't seem to forget. His friends suggest making a trip far away to somewhere she would not be - only to find out her and her new boyfriend are staying at the same resort. His luck may have turned as he meets a nice young lady who is interested in who he is. This movie is funny as hell and this movie is not a cliche like other movies.

To be completely honest, I went into this movie expecting to thoroughly trash it as soon as I walked out. I thought it was destined to be another cheesy rom-com with a predictable ending and terrible acting. I was wrong. Little did I know, this was another Judd Apatow produced comedy, and almost everything heâs touched over the past three years has turned into pure gold, including âThe 40 Year Old Virginâ, âKnocked Upâ and âSuperbadâ. âForgetting Sarah Marshallâ is no exception.

Jason Segal of âHow I Met your Motherâ fame, stars as a lovable but lazy music composer for a CSI-esque television drama. After his famous girlfriend (Kristen Bell) dumps him, he decides to take a vacation to Hawaii to deal with it. Little does he know, that his ex-girlfriend is …

Forgetting Sarah Marshall is another laugh out loud film from the guys who made The 40 Year Old Virgin, Knocked Up and Superbad. This one is very fun, often hilarious and pretty well acted. Jason Segel is good in his film starring role, he's funny and quite charismatic as well. Kristen Bell is good but her role (as the title character), seems really short. Mila Kunis is very good and extremely charming, giving her best film role to date as the sweet receptionist who nobody's fooling. However, The standout of the film is Russell Brand who steals every second of every scene he's in and actually seems to have been given the funniest material. The Supporting characters such as Johan Hill, Jack Mcbrayer, Davin Mcdonald and especially Paul Rudd, are funny as well. ...oh, The Direction and …

Apatow's Best One Yet.

Just thought I would squeeze in a quick dvd review before the long weekend. I missed this one in theatres but was able to catch it on dvd.

Forgetting Sarah Marshall is a crude take on romances/relationships, and is probably Apatow's best comedy flick yet. I did not like Superbad. The 40 year old virgin, which I've seen atleast 20 times, gets under your skin. But Sarah Marshall is easily Apatow's best one yet. Or atleast I think. It's easy to tell it's from the Apatow library of comedies, with all the dirty crude sex jokes, and adult humor.

the 2 hour movie consists of peter, the main character lying on the floor of his expensive hawain suite crying his sad ass off, and crappy green screening, which happen to be quite funny. Oh yeah, the characters are done pretty well.

No posts have been made on this movie yet. Be the first to start talking about Forgetting Sarah Marshall!