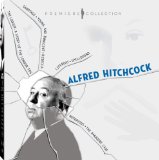 Plot: A cinema owner is suspected of being a saboteur in a terrorist gang launching attacks throughout London. As an undercover Scotland Yard detective investigates, he begins to fall in love with the suspect's beautiful young wife.

Not one of Hitchcock's best, but still an entertaining and thrilling ride. I recommend this to any Hitchcock fan. It has a lot the same elements that make his later films unforgettable, only this film doesn't capitalize on them.

Although the romantic subplot of this film doesn't really connect, the thrilling terrorist mystery demonstrates Hitchcock's early skill at building tension and intrigue from scene to scene.

Top Films of 1936 by Neobowler

Movies I want to Watch by enuscher

My DVD's: Hitchcock by Snoogans

No posts have been made on this movie yet. Be the first to start talking about Sabotage!