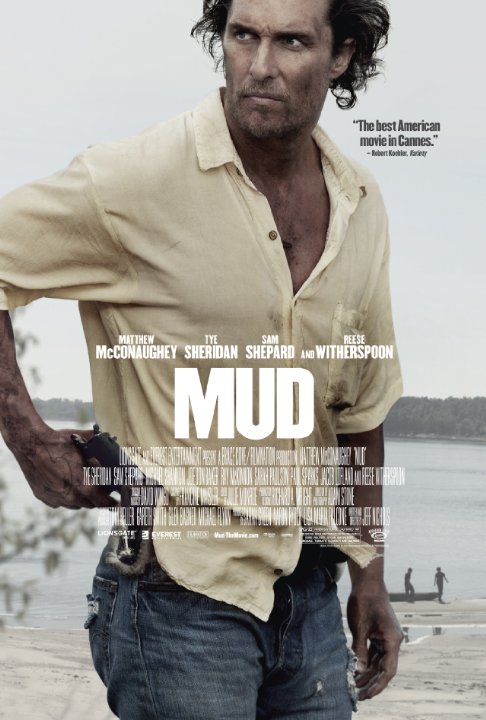 Plot: A fugitive looking to reunite with the love of his life happens across two teenage boys and the three form a pact to help him evade his pursuers and complete his quest. -- Chris Kavan

The immersive and authentic "Mud" follows a mysterious loner on the run from the law and a naive teen with a lot to learn about love and trust.

The story is about a fugitive looking to reunite with the love of his life happens across two teenage boys and the three form a pact to help him evade his pursuers and complete his quest. The two kid actors in the movie did a good Job in they roles and this was the year for Matthew McConaughey because he was brilliant in this movie.

boring dull movie about 2 kids who befriend some guy they find living rough near the beach. it was as exciting as watching paint dry. zzzz

Two boys helping a fugitive to get a boat fixed ..

Mud is like the procession of Echternach, but with 5 steps going forward. So not that painfully slow. Although it's limited to 10 minutes of more movement in the end, this movie still continues to fascinate because of the engaging conversations and magnificent images of the Mississippi.

The thread throughout the entire film is the trust that Ellis, a boy who's at the intersection to adulthood, has in Mud, a fugitive who apparently killed someone who ruined the life of his childhood sweetheart Juniper. Mud is hiding in a motorboat, high in the trees, which the boys discovered on a deserted island. They help Mud to collect components, even a complete engine, for the boat. And that's unfortunately the main part of the total film. The two rascals moving back and forth to the …

This Mud is fresh and must be felt

Do not go wrong by the name. Jeff Nichols knows such contexts, as he has done it before. (Take Shelter). Family dramas and really a good verse of emotional core, is his area, and here he did no mistake. He puts McCaunaghey (Dominant performance) as Mud, as a fugitive alone in an island fighting for his lost love Juniper (Witherspoon, a slightly indifferent performance) to meet up and escape from there. Nichols brings us this intense and neatly made drama with feasible story telling and game changing performances. Surprise factor: The boys in the film (Sheridan and Shepard) were more than expected. They gave everything they could. In fact, the main asset to this film, is not the hard stick and mixed character of Mud, but the daring and valorous boys. Nichols blends his vision of superb …

The trailer was much more intense than I expected. With McConaughey and Michael Shannon on board, this should be one to watch. I still have Take Shelter on my list of movies I need to watch.

I love movies in which kids have an adventure or solve a problem...The Goonies, Super 8, etc. This film's trailer seams like that kind of movie. Early critic reviews are positive.

The cast is great, Reese Whiterspoon, Matthew McConaughey, and the two
children.

The trailer is interesting. I'm looking forward to this due mostly to Jeff Nichols, who made what was in my opinion a masterpiece, Take Shelter. It also has Matthew McConaughey, who has been pretty awesome in roles he's been taking lately. Comes out this April. I can't wait.