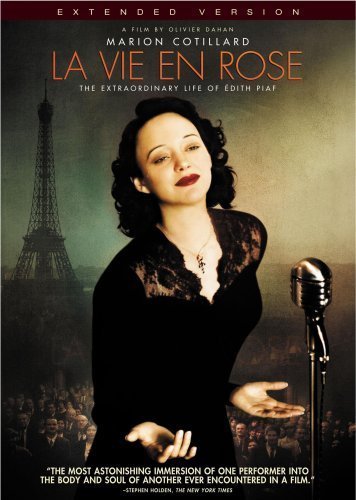 Plot: Released in the USA 2007, and France in 2006, this movie tells the story of Edith Piaf (Marion Cotillard in an Oscar-worthy performance). -- Allison

I can't think of a movie where the chronology was more confusing than this one. Constantly asking, "Who's THIS guy?" Cotillard completely disappears into the role though

An uneven, but moving biopic of Edith Piaf, who's tumultuous life story is chronicled with breathtaking emotion by miss Cotillard, who won a well-deserved Academy Award for her performance. Final Grade: B

La Vie en Rose is a French biopic of Edith Piaf, who was a singer and is regarded as one of the greatest international voices of the 20th century. Similar to Ray, Walk the Line, and other American films of singers, Rose shows Piaf's troubled childhood, a rise to stardom, and an early, tragic death. The film jumps around in Piaf's life, so at times it's a little difficult to know exactly where you're at in Piaf's life. However, the performance of Marion Cotillard as Piaf is amazing. She embodies the character so strongly that she pulls you in, even though the whole movie is in French.

I almost want to give this picture a solid recommendation due to its mesmerizing second half, but I canât find it in my heart to forgive the extremely slow and uneven first half. When Marion Cotillard (who played Edith Piaf) won the Oscar for Best Actress, I was extremely frustrated with the Academy because I expected Julie Christie to win for playing a woman who was ravaged by Alzheimerâs disease in âAway from Her.â But after watching some of Cotillardâs other films (like âBig Fishâ), including âLa Vie en Rose,â I realized how much she had to transform in order to play Piaf. I was really impressed because she almost had to carry the entire film by herself. I donât know if itâs the characters or just the style of filmmaking that turned me off. This film does not …

No posts have been made on this movie yet. Be the first to start talking about vie en rose, La ( mÃ´me, La )!