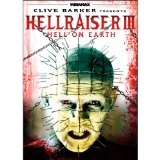 Plot: Pinhead is now trapped on Earth, having left the human side of his soul in Hell, and is eager to recruit a new army of Cenobites and claim the Lament configuration box for himself before an intrepid journalist can open the gates of Hell and send him back. -- cockney0_1

Felt like they had already ran out of story ideas about halfway through. So, they added a whole backstory to Pinhead and then had some random people die and I don't remember much else.

Although not as bad as many of the latter entries, this is where Hellraiser started to go downhill. It's a little too tongue-in-cheek to be that scary, and a few gruesome deaths can't save a weak story.

Man, Pinhead has got quips; who would have thought the hell priest looked on the funny side? He is not too far from Freddy Krueger's territory of dark wit. I was shocked by how much I enjoyed this one, which I did not expect. Iâm guessing this is where the franchise gets silly, right? I mean, this is a guilty pleasure.

Some of the acting is dire, and the movie goes a bit overboard with the campiness, especially with one of the Cenobites whose only lines are puns. Is it just me, or do Pinhead and his gang get deferred very quickly in these movies?

However, I canât help but laugh at the scene where Pinhead resurrects several of his victims as demonic Cenobites, with one being a DJ, whose design has CDâS planted …

my VHS tape collection by sc83x

No posts have been made on this movie yet. Be the first to start talking about Hellraiser III: Hell on Earth!